UNION CITY, GA – A nice field assembled down at Banneker HS this past Saturday for Fall League action on 3 courts, and we got a good look at 7 teams during my stay, here are some of the standout performers:

Cottle is coming off a great summer where he was positively lethal most days out for ABC Elite, he was equally dangerous Saturday with his Bulldog mates as after getting 12 in a defensive clash with Sandy Creek early in the session he came back with a marvelous 24 pt tally in a stirring one-on-one battle with Sequoyah’s Kyle Keener, the fire and intensity is what drives him, and having played in the shadow of the likes of Peyton Daniels, his brother Davon and others the last 2 seasons is embracing the lead role with a vocal and enthusiastic style, he can get searing hot from 3 and despite a diminutive frame gets at the rim as well as any guard in the ATL-Metro, Kennesaw St is getting a good one and was keen to make a big push for the in-state star. 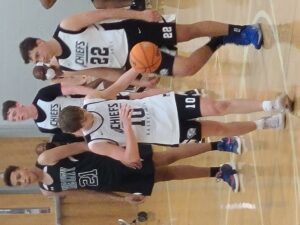 This was among the most aggressive I’ve seen Keener in the 2 years I’ve been on the trail as he went right at Tri-Cities and Cottle, his 13 pt first half was filled with clever drives and savvy finishes several of which earned him trips to the line (a forte of his), the on-ball defense he and Cottle were throwing at each other was special thus making their offensive outputs (Keener ended with 16) all the more impressive, while he had his scoring hat on Saturday he truly embraces the pass-first portion of being a PG and that completes the package, he’s a great fit for the Chiefs with his forward-attacking style with wings bombers like senior Dylan Wolle and junior Preston Parker poised for the kick-outs, after a really productive set of live periods Maryville and Piedmont have offered. 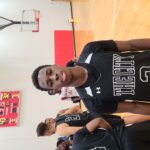 Caught the Luella transfer in June at LakePoint as was immediately impressed with his attacking style that was less “bull your way in” and more “astute analysis”, unlike so many guards these days Mincy is quite capable and willing to take the shot in the mid-range be it a soft floater or a textbook-looking short J, he’s lightning-fast into space and is a serious handful one-on-one with his slick handle, like we’ve come to expect from Tri-Cities every time out his defense is stellar and fits into a team defense philosophy which was in full effect as they stormed from behind vs Sequoyah, played up with ABC Elite all summer and with ABC teammate Cottle makes for yet another terrifically exciting guard duo in East Point and with Sandy Creek transfer and rising junior Eltramon Smith gives them a monster trio to lead them on a deep 5A playoff run 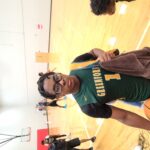 It was interesting as I watched Forrest Saturday go through a process vs Banneker where he almost methodically began to heat up and assert himself, it resembles a process where he patiently gets a good look at what’s in front of him and begins said process in earnest, inside of that attack is a combo of power and finesse which is a lot to handle particularly for a kid his size who so often will have smaller defenders on him, didn’t use the post-up against Banneker but I’ve seen him back down smaller players and he can really get up and through contact when he’s in close, facing the basket his downhill gear is also a train to be wary of and together with 6-5 senior guard Florian Tenebay (a smoothness and glide to his game playing the 1 or 2) is a big-time backcourt to work with highly-touted bigs DK Manyiel and Gai Chol, Temple, Kennesaw St and USC Upstate are among Forrest’s offers.

This was a team I was looking forward to seeing after an 18-win campaign and 2nd-round trip in A-Private last year, Fulmore was an absolute beast around the basket, he gets off the deck in a hurry and has a frame built for contact, a sleek-moving athlete who was also impressive out in the open floor he is both a fearsome glass cleaner and instinctive shot-blocker as well, at his size he’ll need to keep developing shooting range to be more effective away from the basket but with an athlete this impressive you can work that once he’s on campus, with guards senior Jordan and junior Jaden Emory plus other capable pieces this has the look of another SACA group that can make playoff noise.

Became familiar with many of these Cougar players through their spring and summer work with Elite Playmakers, my first time seeing Ivory was particularly intriguing because Alexander was without two key stars in 2022 Zion Fruster (Tenn St visit) and 2023 Braedan Lue (injury), Ivory’s inside-out ability, rebounding and defense will be a great elixir to go with those missing players when the full group gets rolling in November, he’s a veteran player and you can tell by his vocal leadership and hustle, this should be a markedly improved Cougar team with so many young players maturing off last year’s experience, a vast interchangeable rotation includes skilled junior wing Noah Melson (Western Carolina, Florida A&M, Kennesaw St offers already), senior 6-5 wing Jah’Kim Payne, PG’s senior PG Joffrey Nunnally and junior Mekhi Kennedy, and hybrid junior forward Jazzdon Streeter who really looks like a potential breakout.

Think the backcourt of 2022 Vic Newsom (left) and 2024 Amari Brown can be really good for @athletics_creek come winter, Newsom plays a physical brand up and down the floor, and still a young PG Brown has the look of something special with his skillset@OntheRadarHoops@OTRHoops pic.twitter.com/yUl6dalg2m