COVINGTON, GA – The Big South Shootout was back in town yet again to polish off the 2022 schedule, this time shifting from Sandy Creek to Newton High School and incorporating primarily teams from the I-20 corridor.

Quite a few were on the docket that I hadn’t seen or don’t get a chance to see often, so it was a fun and important day. Of the 6 games on the schedule, I was able to catch 4, here are some standouts from games 2 thru 5. 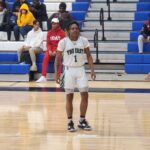 Been talking a lot of late about the top defensive programs in the ATL-Metro and after watching this now 13-1 Eagles group they have to be in the mix, it was as I tweeted below a wave of bodies and pressure that extended the full length of the court and made everything difficult for Butler, at the helm of that was Reed who was calm and cool but pushed pace at the rim and finished when it was there and set up his guys all day, after a good summer with Atlanta Astros it was great to see him with his home crew as the Eagles may not have a ton of size but they will be all kinds of problems in 5A with the defense they generate.

Reed controlled the game from the PG spot pushing pace and anchoring the D as the Eagles come at you in waves of bodies up and down the floor, Johnson's a 2025 to watch pic.twitter.com/YLeOgGdpnE

Always a treat when you look in teams you don’t see much and uncover a young player on the rise, that’s Johnson as he showed off a confident scoring acumen with a perimeter game which goes well with this group of relentless Eagles, can be a tough matchup opposite Reed’s speed and experience, immediately enters the 2025’s to watch out of the East Metro and beyond. 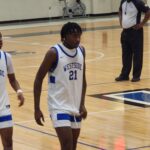 The defending 2A champs have a ton back from last year’s team and took apart a good Mays team early and often, Hudson has an intriguing mix of power and finesse that can result in some face-up problems guarding him or he’ll go and push you around close to the basket, my first extended look and it was impressive, he’s got a lot of help on this club but a return trip to Macon will likely come off of his fingertips in key moments.

Another balanced and attacking Westside bunch who you will not want to see come 2A playoff time, @KhalonHudson, Bobby Blackwell and the two above guards strike a dangerous core pic.twitter.com/nwOpJRGoVE

Could have just as easily been senior Jalexs Ewing in this spot as Ewing’s backcourt versatility and willingness to bang and fill the stat sheet is crucial to this team as well, loved the way Tillman ran the show and used crafty play and smarts to confound Mays all game, his knockdown 3-pt shooting was the big story on this day and that element can open up alleys for the likes of Hudson, Ewing and 2024 forward Bobby Blackwell, when it’s all going like it was on New Year’s Eve a second 2A title banner in Augusta seems tough to bet against.