TYRONE, GA – We covered guards who couldn’t be missed from last week’s Big South Shootout at Sandy Creek HS, we move to the frontcourt now with eye-catchers from the first 5 games:

With Micah Smith out still tending to a wrist/hand injury Bevrotte has been offered the space to show off his versatility and hasn’t disappointed, loved the variety of mid-range to interior work he put in vs Heritage-Newnan, has always had the jump-shooting and being able to draw bigs out the to the line is an advantage for the Pats, was skilled and efficient on the catch in close with jump-hooks and slick finishes into and around multiple defenders, stock was already on the rise for the transfer from Louisiana but he’s sure to benefit on the recruiting front from more touches and more space in Smith’s absence. 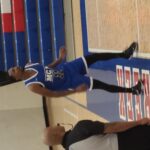 Playing kind of a hybrid forward mold for MGP but still was very active both in close to the cup and showing off his perimeter game with a pair of 3’s, either way the athleticism as a rim-runner but also coming in off the wing in the halfcourt makes for an intriguing package, plays bigger and can offer excellent defensive versatility with a good frame and sound fundamentals. 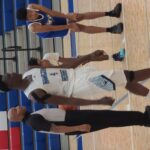 Perhaps the day’s most fascinating specimen was Cyril, looking like a college sophomore with a frame built for contact and lift off the deck like Blake Griffin in his heyday, not your lumbering big-man-in progress type as it was basically time to retreat when he caught the ball in close vs MGP because the hammer was coming, the overall work on offense needs honing but the incredible body and swift movement was as eye-catching for a young big man as you’ll find (an offer from Kansas among others can attest to that), defensively he was the best player I saw all day as he was an A+ rejector with superb timing and a terrific understanding for a young player of how not to foul and still get the block, he had double-digit rebounds easily by the 3rd qtr as well and at the HS-level is just so tough to block out at his size, a future high D1. 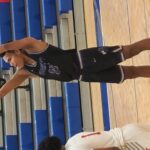 Really impressed with his outside-in game as he used good length and swiftness off the catch to score in tight and use the bounce to get by people from further out, a tireless worker with a motor that is sure to catch eyeballs, as he adds to his frame and matures naturally in his game the upside is potentially special, did step out for a pair of 3’s and as that part of his game also evolves into a consistent weapon he and junior guard Justin De La Cruiz can be new foundational pieces down in Sharpsburg for the solid TCS program under excellent coach Will De La Cruz.

Somto Cyril’s presence was an eye-opener for his age but no one looked more ready to play at the next level than the former Shiloh General Ausar, plenty of impressive options for the deep team from Charlotte yet Ausar had been making plenty of waves heading into Big South and little changed against a solid TD Prep crew, there were moments where they had virtually no answer for his pure physicality and athletic ability at a stout 230 lbs, he looks the part of a forward with uber confidence in his abilities to dominate off the catch in close and explode impeded or unimpeded to the rack, can also hurt you from 15 feet out with a couple of power dribbles leading to a monster dunk, still undecided on his future college choice but it took all of half a quarter for him to distinguish himself as one of the best players in attendance at the event. 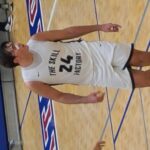 Kapic has been making a strong impression going back to June Live Periods with Denmark, now with TSF he continued to make a strong case for his presence on a D1 roster somewhere this time next year as he can really shoot it from that stretch-4 role, that said he has no qualms about getting inside vs Dream City Christian out of Arizona and giving you both a workmanlike effort of the glass and some sound defensive work against opposing posts, like many European products he’s an unselfish and smart passer and plays the game like a seasoned vet whose been doing it this level for a long time, getting high-level coaching from TSF and Trey Scotti and will be a huge steal and the kind of guy who will get even better and smarter under the tutelage of a next-level staff.