TYRONE, GA – The annual Big South Shootout went off once again at host Sandy Creek HS, and a fascinating array of teams from both in-state and out converged on the home of the Patriots for 2 days of hooping.

Let’s look at some of the top backcourt gems from Day 2’s first games on Jan 1: 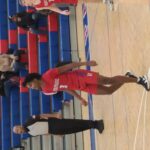 Second straight big tournament following up a solid performance at TOC for Nichols, once again he was a slasher’s delight using long strides and a fruitful arsenal of moves to find his way to the basket, has a knack for playing through contact and getting to the line, stepped out late in the game for a 3-ball but he’s a less a long-bomber and does more consistent damage on the power drive and from 15 feet to 8 feet, definitely has next-level ability and tools.

Like ATL T-Wolves teammate Luke Flynn has been making a rapid advancement onto recruiting radars all over town, perhaps not the pure scorer Flynn is Skidmore can still hurt you from multiple levels as he’s plenty comfortable beyond the arc and already boasts a solid frame for getting into traffic, see him more as a pure point at the next level but has 2 years left with the Hawks and with Nichols and Malachi Townsend graduating will certainly take on more scoring in years to come.

Newsom continues to impress at both ends with a high IQ scoring approach and the kind of foot speed and anticipation on defense that coaches love, playing in a deep rotation of guards (including Amari Brown, Andy Williams, Jaren Alexander and PJ Green) that can all hurt you Newsom stood out Saturday for the aforementioned excellence at both ends and for his great burst with the ball, love the way he uses a running back’s frame to finish with some punishment and is a really sound decision-maker when he’s in control of the offense. 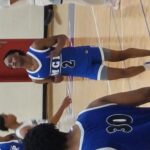 MGP plays a ton of dudes so it was frankly difficult for any of them to get into a major groove, but George flashed his great speed with the ball and ability to push pace as a facilitator, showed off the range from 3 and his explosion to the rim that has been a staple of his going back to both SEBA and Sprayberry, the pure speed and shooting immediately qualifies him to help someone at the next level and the re-class and move to MGP should help that.

The overall picture and athletic skill immediately jump out with De La Cruz, he’s a smooth mover with some variety in his attack package that at 6-6 makes him someone to watch, he took it out past the arc for a pair of 3’s as well vs East Nashville and was active on the glass, with his long arms and movement he has interesting defensive versatility as well as he’s currently forced into guarding bigs but he’s much more comfortable and efficient giving smaller guards a hard time. 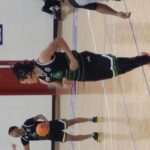 Big fan of the full gamut of things Hopkins can bring to a next-level program, the great size and length at 6-6 means he can shoot his pure jumper over smaller players and slither around bigger ones, still wearing a knee brace that clearly hinders his movement some he still impressed both with his effort at both ends and ability to catch and shoot with a swiftness that translates really well, with a healthy knee and a few pounds added to the upper body this is a player that will be really effective for many years at the college level.

Outside of Prolific Prep (CA) perhaps the most impressive roster of players on Day 2 came from Charlotte, Demary didn’t have a big scoring day but with all the options available for the guys from NC he didn’t have to drop 20 to be a factor, great size and poise packed into this sure-fire future D1 guard, a good group of athletes from TD Prep had difficulty containing his physicality and his game-control was high-level even if he didn’t post the big scoring numbers. 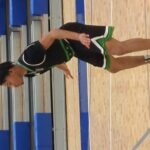 Confidence to burn and a willingness to take the big shot or find the right man, these traits date back to his time at Evans as well as a strong summer with Atlanta Lightning, has real lead guard moxie and can get you 20 and 6 one night as the primary bucket-getter and then come back and get you double-digit assists and 5 steals the next, plays stellar on-ball defense with a real edge and at no point did I say to myself or notice that his membership in that under 6-foot club played any role in his effectiveness against a really good Liberty Heights team.

Still gets at the basket and gets off his pretty jumper with the same effectiveness now for TSF after stints of course as a player-to-watch at Decatur and Mt Pisgah, the good size for the 2-spot makes him attractive with the way he can get steaming hot on scoring streaks from the perimeter, gives you defensive versatility and rebounding from the guard spot as he’s an athlete that can run and jump, colleges I imagine will keep a trained eye on his defensive effort which when tuned high is another key tool he can offer in his toolbox.