BUFORD, GA – The inagural Buford Classic went off at Buford Arena between Christmas and the new year, and 8 teams descended for what was 3 days of very good basketball.

We took in Day 2, here’s part 1 of 2 with some recaps of what we saw and who stood out:

THE SKINNY: West is still adjusting to life without star 2024 Will Moore and looked crisper than when I previously saw them, but simulating Shiloh’s defensive pressure and athletes is a tall task for any program in preparation.

WEST NOTES: I believe Chase Damerell was set to take a big step this year even with Moore in the lineup, but to see him again show off the kind of assertiveness at 6-5 at both ends bodes well for his recruiting profile. With fellow 2024 Sam Maynard they make for a dangerous twosome from multiple levels, Maynard was hampered by could trouble but was a big part of a 19-pt 4Q that closed a 15-pt gap after 3 and illustrated the kind of fight we’ve come to know from the Wolverine program. 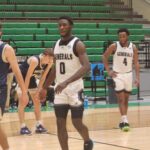 SHILOH NOTES: 2025 riser Tylis Jordan draws a lion’s share of the attention on any Generals scouting report, but on this day the steady hand and relentless defensive heat from 2023 guard Naz Griffin (pictured) was fun to see. He’s had some eye-popping moments in the past particularly in spring and summer’s past first with Norcross Heat and of late with Showtime Ballers out of Florida. With Manny Okogie on the wing getting into some nice scoring rhythms lately and athletic guys like Miles Kilpatrick and Akil King able to move the defense and get up and down the floor this is a Shiloh bunch that is far better than their record would indicate and will surely be a factor for a state spot out of Region 8-6A.

THE SKINNY: There are a handful of clearly elite defensive programs in the ATL-Metro right now and the Comets are absolutely in that discussion as they are so disciplined in their system and so aggressive the length of the court, no matter how much tape you watch it’s going to look wildly different when it’s in your face.

WALNUT GROVE NOTES: SGHS made life hard for superb 2025 point guard Marcus Smith all day and when he’s unable to use his speed and creativity to get at the basket and draw defenders away from their scorers it can be a tough day for the Warriors. Deston Christian too never got the kind of looks he’s been thriving with of late, and this team after a brutal gauntlet of a schedule the first 2 months is surely looking ahead to Region play where they won’t have anything close to a cakewalk into the state’s out of 8-4A but are surely among the favorites for a spot. 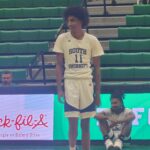 SOUTH GWINNETT NOTES: Senior forward Ansar Osman (pictured) has emerged into star territory for the Comets this year but it’s always a potpourri of scoring options and ways they can hurt you when you take the floor against Coach Qaree Howard’s bunch. Senior Justin Redmond had a hot hand from 3-land with four of them vs WGHS while doing his regular steady job at the helm, and seniors Jet Horne, Kendal Walker and Jacob Washington remain steady options off the ball and can be the guy any night. They’re getting more physical play up front from a cadre of athletic bodies too, and those guys anchor the incredible defensive pressure referenced above for one of the best crews at that end you’ll see anywhere.