BUFORD, GA – The inagural Buford Classic went off at Buford Arena between Christmas and the new year, and 8 teams descended for what was 3 days of very good basketball.

We took in Day 2, here’s part 2 of 2 with some recaps of what we saw and who stood out:

THE SKINNY: In part 1 of this recap we spoke highly of South Gwinnett’s defensive prowess, and it’s been pretty clear for many years now that Archer’s program is among the true standard-bearers for defensive excellence, with seemingly little to no dropoff from year to year or for that matter from first unit to second unit. 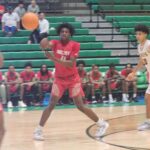 ARCHER NOTES: It was a 5-on-5-off barrage by the Tigers as they suffocated a really solid Chiefs team, rare is it when a team replaces their entire lineup in a game and it look so close to the same product, but with this Tigers team it’s a bevy of options. The particular depth behind burgeoning star 2024 Kahmare Holmes (pictured) is really taking shape, and much of it is guys who have patiently waited their turn. Elijah Davis, a senior wing who waited behind a deep 2022 class to be in the center of things offensively has been steadily looking more and more like a key 2nd option to Holmes. Another 2023, Seth Means, gives this team high % outside shooting, it having been his calling card for some time now. And senior transfer point guard Josh Mathurin has been the kind of veteran steely influence with the ball in his hands even with a crew of juniors and sophomore riser Jaylen Richardson also in the backcourt rotation.

SEQUOYAH NOTES: While Preston Parker’s incredible development into a legit star talent has been the story as he heads to the 2nd half of his senior season before going off to Alabama-Huntsville, there’s a lot more on this Chiefs squad to make them a tough out once again in 6A. They’re sound and fundamental and can play some D of their own, all things we’ve come to know from the Canton program. Seniors Stephen Galvin and Tyler Hammond like many of the Archer 2023’s have waited their turn to be key contributors, and sophomore Brendan Tousignaut has the look of a future star who could follow the same trajectory Parker took as he shot forward from his sophomore season on.

THE SKINNY: One of the better games of the season’s first two months, it was back and forth and tight and physical, with the host Wolves doing just enough late and thwarting two chances at the tying bucket in the closing seconds. 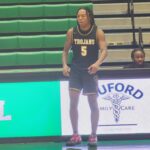 CARROLLTON NOTES: Several of the names were familiar from travel play, but seeing this Carrollton team whole for the first time was a treat. 2024 PG O’Brien Watkins (pictured) has been a notable riser around North Georgia for some time, and with a crew this talented his true skillset was on display. Plays like a running back bouncing off tacklers, as he got to the line 12 times and finished with 20 pts. Speaking of football, 6-6 junior Caleb Odom is a D1 WR-prospect on the gridiron and casts a huge shadow on the hardwood as well, he piled up 14 pts vs Buford even with foul trouble hampering him most of the night. Completing the trio that is more than good enough to anchor a deep playoff run in 7A is 2023 guard Keshaun Pace, he brings the explosiveness and creative scoring off the wing to augment Watkins up top and Odom in the paint.

BUFORD NOTES: It’s been a David Burnett kind of first 2 months as the Wolves have like many teams in the ATL-Metro navigated a brutal pre-Region play schedule. A skilled but often complementary and hustle piece the last 2 seasons, the 2023 guard’s offensive and athletic ability have been on display in spurts that were super valuable to the Wolves success in seasons past, but the ball is now his in key situations and from my seat his recruiting profile is skyrocketing along with his confident play. There’s a ton of natural talent on this team to go to when Burnett is bottled up, keeping their heads about them and not losing focus as a group will be a key. Emerging from this game was surely 2026 Torre Costin, who can’t be more than 5-7 out there but has an incredible stroke from distance and plays with all kinds of moxie and advanced IQ play. He’s immersed himself in the freshmen to watch for sure.