OTR dropped by this past weekend for Week 2 of 8 to evaluate some of the players on hand, and as expected some of the underrated programs on hand produced a slew of players to watch. Didn’t catch all 16 boys programs, but will be back in 2 weeks to hopefully cover those I missed, here’s Part 1 of 2 from my observations:

The day’s breakout hit to me as he was all over the place for an Osborne group that looked sharp and ready vs a depleted and new-looking Marietta group (no 2022 stud G Charles Gauthier and sans 3 notable transfers this offseason), it’s unclear at this juncture whether Memphis-signee Zocko Littleton Jr will suit up for the Cardinals but even if he doesn’t this has the look of a team to watch, Carroll showed off a nice aggressive dribble-drive package as he can handle it out from t at his size, such a good athlete he can easily guard up to 4 spots and provides nice versatility, he joins younger brother Jonathan (6-7, 2023, tough right around the basket) and McEachern-transfer Keshawn McPherson (6-4, 2023, can face up and get downhill) in a frontcourt that can seriously get to the glass and cause all kinds of problems for defenses. 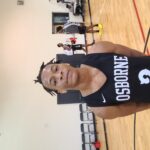 Monster-climber coming off a summer for T.R.U. Elite where he showed off incredible speed at both ends be it getting out into the open floor or acting as chief terror on defense, much of the same was on display Sunday vs Marietta as he and his mates turned up the full-court pressure and guarded like they were down in Macon in March, Chapman spurs that energy and can really dictate with his ability to penetrate, if Littleton is in this mix to go with steady veteran presence 2022 Justin McCarter and good-looking 2025 Akai Fleming that’s quite a backcourt mix for a Cardinal bunch that can do some big-time damage.

Was a noteworthy presence on the Spring/Summer Showcase circuit and didn’t disappoint as he showed off his exceptional defensive instincts around the rim to go with an offensive package that is clearly on the come, Sunday he had to take the bull by the horns a bit with the Blue Devils notably without 2022 guard Charles Gauthier, and when he is assertive and engaged like he was he can be a very enticing prospect with such length and glide, as the consistency of scoring in close tightens up and he adds some mid-range shooting to his high-flying abilities it can take him to the next level. 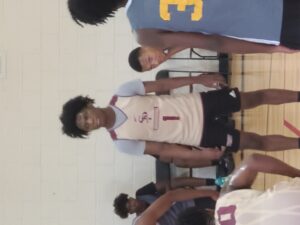 Like the way this group played particularly without star 2023 Gio Thomas, there’s plenty there to augment Thomas and a lot of it comes in the form of the stout Taylor, looking like a D1 running back out there he can bull his way to points or hover around the 3-pt line and do damage there, averaged 23 ppg in June at the GBCA Camp and looks as though he could easily match that come this regular season with a numbing-athleticism and explosion off the deck, the Spartans are breaking in a new PG in 2023 Sean Lynch and he looked composed and showed off some flash in his dish game, with Thomas roaming the wing and wreaking havoc above the rim it should be interesting to see how this group, which returns notable pieces from a 15-win team, develops.