DALLAS, GA – We continue our look at standouts from Create the Culture’s Fall League from East Paulding HS, with Part 2: 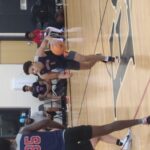 We can debate Hamilton or Allatoona’s Cayden Charles (the two faced off Sunday and Charles is featured as well below in this piece) as the most gifted prospect in the field in Dallas, what separates Hamilton perhaps is the natural abilities he shows off as he makes his way around the floor in accomplishing his business, the whole of his skillset drips with polish and the promise of a sure-fire D1 guy – great size, speed, fluidity in space or dicing up defenses on a drive package, he adds NBA 3-pt shooting range with as natural a stroke as you’ll find and with legit wing size and lateral swiftness can guard 3 spots, were he at Grayson or McEachern he’d be even more suitably hyped although he’s a well-known commodity from his summer work with AOT, at Cumberland frankly he’s so good and is surrounded by so many other talented players (fellow 2023’s Gora Niang and Christian Bacon and 2022’s Elijah Wiseman, Jermaine Smoak and Delva Chedlet) it shouldn’t hinder his recruitment one bit, picked up a late summer offer from ODU and more are undoubtedly on the way.

Finally unshackled from Allatoona’s veterans of 2020 and 2021 who were the focal point for some solid Bucs teams the last 2 seasons, gyms and sideline seats began filling up fast this spring and summer as Charles began his rapid emergence playing for SEBA and just took the scene by storm, great slash and defensive skill were already his hallmarks, but we saw Sunday and have seen since March expanded shooting range out past the arc and a face-up, ball-dominant assertiveness in a lead role that was sure to excite coaches during the live periods and was again on display this past weekend, has a D1 offer from The Citadel with several others showing interest and is as big a riser as there is in the ATL-Metro and slated for great things in his future.

Let’s dismiss the size question right off the bat because it doesn’t affect Williams or how he relentlessly attacks and plays the game, playing mostly up all spring and summer for Wood Elite and Spencer Dixon he has made monstrous strides and gained all kinds of confidence to go with a sound base of skills and some flash that clearly surprised the Furtah Prep guys Sunday, he’s been handed the keys to the machine and the work he’s gotten showed in how he handled on-ball pressure, pushed the pace and got into the lane for his own offense as well as slick dishes to the many options for the Pack (stellar 2022 wing Trey Harris and 2023 posts Nathan Rodriguez and Gavin McLain). 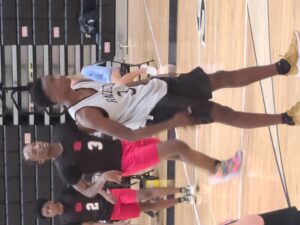 New Manchester and its own athletic bunch (2022 wing Jordan Edmond and sweet-shooting 2024 guard Chase James-Robinson are ones to watch for the Jags) wasn’t going to let Tidor take over the game early on Sunday so they rolled guys at him mercilessly for the opening 30 minutes of 40, the last 10 as East began pulling closer Tidor showed off some of his special gifts as a power driver with a creative flair, most night’s he’s going to be the best natural athlete out there or close to it and when he turns it up he can get to the rim and score through contact as well as any guard in the West-Metro counties, the shooting is there and has another level still and that to next level coaches (VMI has shown interest) should be enticing because you can hone the shooting range but can’t buy this kind of athleticism (and a great kid and attitude as well) on every street corner.