LILBURN, GA – Our Deft Handle segment, a look around the GA scholastic hoops scene, returns with the season now tipped off.

The brothers Pack and their DT Invitational crew put on another terrific event last weekend, this one 19 games in 2 gyms over 2 hoops-filled days at Berkmar.

Spent Saturday’s schedule in the main gym, here are are some impression-makers from that slate of games. 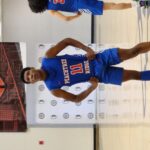 Solid team win over Dacula to start the day and Martin was electric at both ends, he was large as part of an overall team defensive scheme that was impressive in pressing the Falcons into mistakes, great burst both out in the open floor and at the basket, can handle the PG duties with smarts and fire or play off the ball and beat you from multiple levels, energetic and deep backcourt options support Martin with the likes of seniors Bradley Goines, Rashad Dames, Jameel Peters and Khush Chauhan and highly regarded sophomore Connor Teasley, but Martin is rapidly emerging coming off a good spring and summer as well as a major sleeper in the 2024 class. 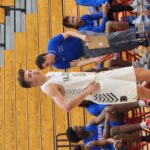 Confident and assertive running the show as it’s his ball to own this season for the Falcons, has always had some flair in his game which catches folks off guard but now as a senior that aspect combined with some aggressive attack-minded play is showing out as a real weapon, a terrific passer he has the head on a swivel and has some dangerous finishers to find on this year’s roster 2024 forward Blake Wilson most prominent among them, the 3-point shot was on Saturday as well and it’s something teams will have to carefully address if they wish to avoid getting lit up in scoring spurts. 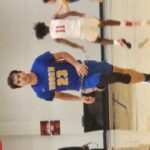 The eye-popping natural gifts of teammate Cam James often draw the lion’s share of eyeballs with this Hooch bunch but you couldn’t look past the steady and hard-working play of Temple against a wave of Archer frontcourt players, we know of the soft shooting touch from 3-land which is a weapon that has to be marked closely but it was his work on the glass at both ends against an athletic Tigers rotation that stood out, got some putbacks and had some senior-level moments playing with his back to the basket, his time to shine in blue and gold. 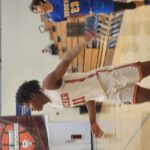 Among the day’s breakout conclusions is that Holmes is a name you’re going to need to know quickly, reminds some of 2022 Tiger star Damoni Harrison, has a calm and cool demeanor out there as he carves off the bounce with a sweet touch from multiple ranges, doesn’t miss any bunnies in close as that poise is also a sharpened focus when he’s got a close-in chance, possessing an advanced offensive understanding he’s also a good fit for the Tigers pressure D as well as those instincts extend the full 94 feet, my first time seeing him live and all the positive buzz I’d heard was easily confirmed by this star-level player who has the moxie and skill to give 7A foes all kinds of problems. 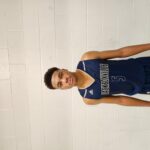 The South Alabama-signee was athletic and long as a wing assassin, got better as the game wore on when his team needed a bucket or was putting pressure on a really good King’s Ridge team, slithery and yet strong to the hole he was able to get to the line often with some crafty play, a really good fit for Sun Belt play. 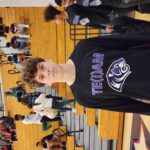 Certainly the addition this year of 6-10 William Jobe gives this lineup an obvious new look, but it’s been my assertion since the end of last season that Thomas’ emergence into a reliable and exciting scoring threat would be huge for the Tigers to get over the hump this winter, we saw just that sort of thing at the DT Invit. as Thomas unleashed his pure athleticism in spurts and gives the roster energy, more deep shooting and exciting basketball off the wing, will be such a productive college player in the right system and should be getting more prominent attention from D2’s and D3’s.

Not only is it fun to see a guy embrace working down in the post it’s good to see Williams in more of a feature role with some backcourt changes sure to take time for the Wolves, the hands and footwork are exceptional and he can play the bull or show off some sneaky finesse, and in this his senior year he’s clearly looking like a leader among a 2023 class that even minus Malachi Brown is coming off a 6A finals appearance and is determined to do damage in 7A this winter.

Didn’t take but a few minutes for Tucker to cement himself as one of if not the top guard in the 2025 class, so advanced offensively with such a mind for scoring it’s a heck of a package to contend with, lay off him and he’ll bury you from deep and come up too close and he has great burst into open space, love that he can play either guard spot and control the game without losing quality opportunities to attack and score.

Playing alongside another transfer in good-looking 2025 Eddie Cooke III the twosome make for a physical combo as well as one that sees the game a half-step ahead of others, Lee has found a home with the Pats and is clearly the man there to showcase his myriad of skills, can play with a speed/power combo at 6-6 that is a whole bundle to deal with for smaller PG’s, he can then slide off the ball and shoot it from beyond the arc or be a downhill rhino getting as the basket and drawing contact with his sturdy frame, has been and remains one of my favorites in the state as a player with all kinds of game-changing ability.