LILBURN, GA – The Pack brothers, Charles and Michael, from Double Trouble Academy and their DT Invitational series of tournaments, have become a staple on the ATL tournament circuit be it early-season tipoff matchups or surrounding the winter holidays.

Back at Berkmar they went for a Martin Luther King Day version, and they had a full slate of games.

Battling a nasty cold, some standouts from the game’s I was able to take in before succumbing to the chest cold: 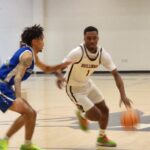 Is unquestionably one of the better available combo guards in the entire ATL-Metro that not enough people know about, has it all for the next level in a package that includes – confidence at either guard spot and a leader’s moxie, plenty of shooting range, a good frame that is strong now and will get stronger still, heady defensive play and a gritty mentality at that end, high IQ on the floor and a great kid off it – get to know this one if you haven’t already and it won’t take long to see what we’re talking about. 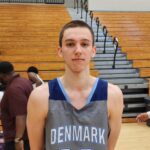 Was in the process of dropping 40 points on WD Mohammed when I got to the gym, and he does it with all kinds of shooting range well past the arc but also a classic mid-range game that he has developed over the last 3 years as a varsity contributor, good ballhandler and passer he can offer some instant offense as a shooter and all the basketball IQ you need at the next level, high academic and a personable-gym rat type away from the bright lights.

Surely among the best guys still available in town 6-7 or bigger, seen a lot of his development firsthand over the last 2 years or so both with WD and in a terrific spring and summer last year with PSB-Atlanta, the fight and the innate understanding of the game are all there in droves and as his body has matured into a man now you can see the two facets merge in a more sustainable basketball fashion, he’s ready with his underrated shooting touch out to distance and a fun and varietal array of moves closer to the basket, as good and gregarious a kid off the floor as you’ll ever meet and that counts for a ton at the next level. 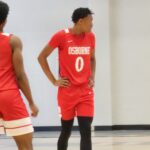 Most in the Atlanta basketball circles don’t need an introduction to Fleming as his star has been on the rise since last season when his freshman contribution to a veteran Cardinals team was eye-opening, another veteran version for OHS in ’22-23 has Fleming even more at the center despite the likes of really good available seniors like Justin McCarter, Keshawn McPherson and KJ Hicks joining him in the starting lineup, that said Fleming is quite possibly the best overall prospect in a growing and deep 2025 class of guys to watch and it’s my contention that he’s not even that close to the ceiling just yet. 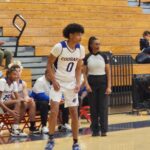 Perhaps the day’s breakout surprise was the eye-opening scoring performance of Reddick who playing with non-GHSA CCA from the south side of town doesn’t get the kind of pub many others do, 25 points will surely get some eyes trained his way and even though he has something of an unorthodox-looking release on his shot he was a bucket when left alone and showed good burst getting to the basket, CCA is a solid program I’m familiar with as 2023 speedster Jaylen Priester (another unsigned senior to track) has starred there the last 3 years as well as for Georgia Express on the travel circuits. 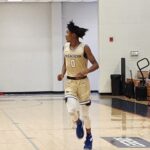 As a Rutgers alum it was particularly satisfying to see recent Scarlet Knights-signee Ace Bailey do his thing to the tune of an easy and smooth 21 points vs King’s Ridge, but my eyes were also trained on classmate Hipps and his eye-popping shooting range and great knack for the catch and speedy release, he quickly has established himself as one of the state’s true deadeye bombers since arriving from the Philladlephia-area this fall, now we just need Steve Pikiell, Brandin Knight and the rest of the RU staff to reel in Hipps as well to join Bailey and already-signed 2023 Indian Jamaichael Davis. 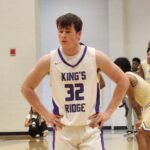 Much like Chase Hill up top Thomas is your prototypical combo guard of today with a seamless ability to go possession to possession filling the role at either guard spot, Thomas also like Hill has a next-level frame and IQ that provide the kind of easy transition coaches love, his confidence level this year with another really good Tigers team looks to be up as well as he’s been more assertive offensively and it showed from multiple levels vs a relentless McEachern barrage of athletes, much like 2023 teammate wing Jack Thomas (no relation) they are quick off the tongue when talking about the very top of solid all-around available guards in the class. 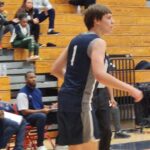 The Roanoke College-signee recently was honored for his 1,000th career point as an Eagle and was instrumental in MB closing out a quality win over a really good South Gwinnett team at the Peach Ball Classic, mixes the old and new really well in his game with the want to get at the rim but also the wherewithal to stop and pop from a variety of ranges, underrated passer with the ball in his hands he will have a super productive career for the D3 Maroons of the Old Dominion Athletic Conference. 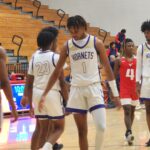 Arguably the owner of last summer’s most explosive individual performance was Tyler as his near-50 point hammer at RYZE’s Tournament of Champions was as good as a summer ball outing as you’ll find anywhere, fast forward to MLK Day and Tyler looks the part once again of the dynamic scorer he has set himself up to be, a D1 football QB prospect as well it’s hard to imagine him not going the hoop route the way he has opened eyes with a scoring package that each time out you have a hard time figuring how to stop from a scouting perspective, back with Wood Elite most likely this summer he is one of the fastest risers in the state.