NORCROSS, GA – Dropped by Meadowcreek HS last weekend to get a look at the final week of Mustangs AC Eric Smith’s fall league.

Coach Smith does a June team league as well and has a big hand in developing players around the Metro and offering opportunities to be seen for Gwinnett, DeKalb and other programs.

Some Eye-Catchers from the day: 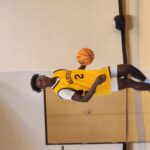 An up-tempo and athletic group from Wilson took the floor again after showing off those same qualities for the last 2 years around town, at the helm appears to now be Ruffin as 2023 guards Isaiah Cameron and Joseph Sonson spent more time on the wings inflicting devastating damage to an overmatched Lakeside-DeKalb JV squad, while all three have college-level ability a small nod has to be given to Ruffin and his special talents, has improved his ball control as a lead man and adds a forceful downhill drive game to a smooth stroke, have been for the last year and remain super impressed with his upside. 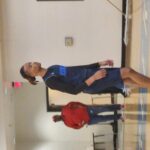 Appropriate attention is beginning to be paid to this skilled scoring guard who with length and a natural smoothness can go on some really impressive scoring runs, recent interest from Vanderbilt backs up what I have seen and commented on many times before with Blackshear who is in a position with this new-look Mustangs team to be a top scoring option even still with savvy and tough guys around him who can also contribute, he should be on any list of overlooked D1 level talents in the ATL-Metro. 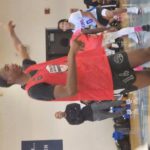 As good as Blackshear looked you had to give the edge to the rising 2025 Generals forward as the most impressive player in the gym for the day, making an impression all over town of late the potential for excellence just oozes from his play as there were moments when you could see he wasn’t sufficiently challenged but kept his effort-level solid throughout, taking away the size advantage he had on Peachtree Ridge he was able to flash a clearly burgeoning yet scarily still unfulfilled high major package of scoring from multiple ranges that easily explains why SEC school like Alabama, Mississippi State and Texas A&M are among the latest in a litany of schools who’ve gotten in on the offer train. 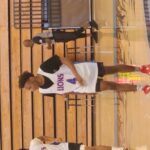 You simply couldn’t take your eyes away from Scott when he had the ball as any trained ye could sense the confidence, outsized in height but not in heart and guts he was skilled handling the rock weaving through pressure and was a handful on the penetration, really good vision for a young freshman which appeared to be a mix of natural instinct and quality drilling, may not crack the Lions lineup this year but is a name to keep an eye on as he makes his natural progression with age. 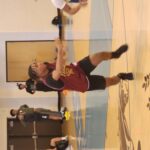 So many times have former Rockdale County guys come up over the last 6 months and here we found another one with a new home now with the Tigers, stout and built low to the ground much like now-departed Raylan Barrion he was a tough ask for defenders on the drive, we got a small taste of his ability to again like Barrion handle the floor leader role or be an inside-out threat as a wing, fits well with the highly successful Tucker program that has averaged 21 wins a season for the last 5 years and is as tough as they come.