TAVARES, FL – The folks at Florida AAU giant E1T1 put on their annual Faces of the Future Middle School Showcase this past Saturday at The Big House just north of Orlando, and the talent and performances from the young Florida prospects on hand were highly impressive.

Having traveled the country quite a bit this year on both the middle school and high school grassroots scene, the youngsters on hand in Tavares were as good or better than anything I saw in 2021 for the 14U and under set.

Some Superlatives, as I spent the lions share of time observing the 2026 and 2027 groups: 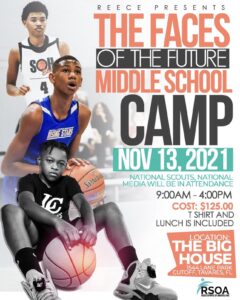 Size generally dominates at this age level and when it’s skilled size like it is with Washington then it’s even more apparent who the top dog is, tricky to project so far ahead but has the look of a high major future prospect even if he doesn’t grow another inch but looks like he could easily get to 6-10, wiry with a ton of room to add bulk he likes to play downhill facing the basket right now with a good handle and understanding of the attack lanes, hit a bunch of 3s when compelled to pull-up, as he adds strength and develops more intuitive options closer to the basket beyond the easy dunks he will be nothing short of dynamite. 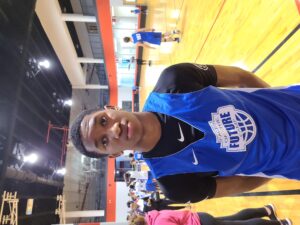 At his best right now a little closer to the basket, the perimeter shooting is a work in progress and due to that he was just nudged out by a slightly ahead Washington from range, still he’s a sterling athlete with tremendous leaping ability as an 8-grader, excellent defender both as a shot-blocker and guarding the ball, like Washington had some highlight-reel dunks throughout the day and again like Washington has the look of someone who will continue to grow physically and mentally and whose game will skyrocket alongside.

Showed no let down going head to head with Washington or Brutus, in fact he often out-hustled them at both ends with his hard-working style and good frame at a young stage, plenty of lift as he got his share of dunks in as well, runs the floor up and back relentlessly finishing with either smoothness or ferocity at the end, went to the glass hard … RUNNER-UP Kevin Thomas (2026) 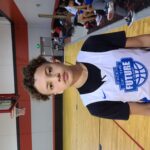 Great-looking stroke from 3-land and gets it off fast, his smooth release has a natural look about it, carries himself with a lot of confidence and gets around the floor well even though he might not be the most explosive guy just yet, feel like he could be a rock-solid 15-20 ppg guy as early as his sophomore year the way he can shoot it and see the moments to spot up … RUNNER-UP Ryan Speace (2026) 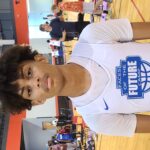 Parham looked to me the most comfortable and perhaps the most ready to be an impact player as a freshman next fall, while the big-name guys above have the measurables and the high-flying attributes it was Parham’s understanding and poise which stood out, he was effective as a lead guard handling pressure and being a facilitator but easily slid over into a scoring role and was able to get to the hole with relative ease … RUNNER-UP Jomar Benard (2027) 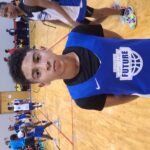 So smooth on the push and the vision from the center of the floor was impressive, he knew exactly what he was up to almost every time down and was equally impressive going the distance for his own offense or finding open teammates for a conversion, showed off slick hands on defense as he was pick-pocketing guys all day and cutting off the passing lanes with clairvoyance … RUNNER-UP Evan Roberts (2026)

This could easily have been any of the big rim-protectors from above but it was the on-ball energy and hands that separated Frisby, in Showcases I always spot good defense because it tends to devolve as the day wears on, went head to head with Daughtry early in the day and it was fun to watch him make up for diminutive size with hustle and smarts … RUNNER-UP Gabe Grimsley (2027) 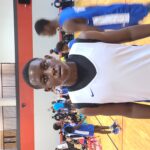 Efficient and clever near the goal he hardly missed from 5 feet in all day and used a stout frame to push his way to even more conversions, sticky hands and nimble feet for a bigger 7th-grader he utilized tactical contact without being a fouling -machine and hit the O-glass with regularity … RUNNERS-UP Brutus & Moton