EMERSON, GA – The GBCA put on another tremendous weekend of Live Period basketball up at LakePoint June 17-19, three non-stop days for Division 1 coaches to be in the gym looking at our bevy of local GA athletes.

Here were 8 top dogs I saw, guys who just lit up the facility with chatter and big-time play:

Unquestionably one of the best pure talents on hand all during that opening weekend, looking past the “dreaded” under 6-foot barrier we find a maestro of a scoring point guard who can flat out light you up with a devastating mix of speed with the ball, tremendous high percentage shooting from all distances and a seriously advanced basketball mind that is part Coach’s son and part natural gifts, there have been few guards under 6-foot during my scouting tenure who are more willing to take the pounding of getting into the teeth of the defense and then keep on coming for more, but it’s not all pushing the issue at the hoop as his jump shot is so pure and so well-drilled that he can round up points in bundles by killing you in the mid-range as well, a quicker version of former Hooch star AJ White and one to take a hard look at as he checks all the boxes off the court as well. 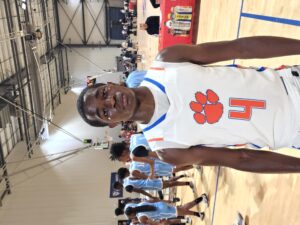 Parkview graduated a bunch of foundational seniors leaving Matthews as a key returnee even though just a junior, but the likely future D1 wide receiver has terrific natural instincts as a leader as he takes on all comers with a smoothness and assuredness that is obvious, his obscene natural athletic gifts allow him to score in near-effortless ways while at the same time showing off superb basketball acumen, whether he’s knocking it down from distance of driving at the hole with power and finesse it’s a fun package to watch and one I’m always drawn to. 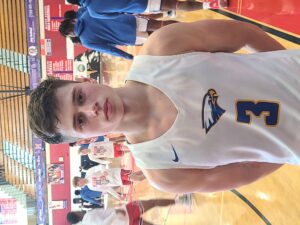 The momentum taking off behind his recruitment can be easily seen through a scroll down his Twitter feed as he was already a top riser in that arena but after the last 2 weekends it’s become clear just how good and how coveted the PG’s services are, high majors are taking notice of the ease with which he makes things look, his leadership qualities now at the forefront as a senior the full gamut of his game such as the pinpoint passing and the overall understanding he possesses are just so consistently excellent it generates a ton of buzz when he slips on the blue and gold, after years of tireless work on his body, game and mind it’s all so well-deserved. 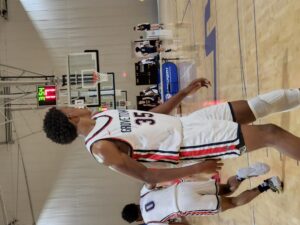 Universally throughout the opening GBCA weekend it was hard to not say that Reid was putting on some of the most dominant play anyone saw, on a returning state championship team back almost entirely intact it’s clear he is set to make a jump to the next level even with high-powred 2023 teammates all around him, the face-up game has become high D1 level in a hurry after showing tantalizing signs for the last 2 seasons and adding in his ability to play the 1 and then drop down and play with his back to the basket as a 5 and it becomes readily apparent why his phone was so busy up at LakePoint, with coaches these days mostly honed in on securing their 2023’s it was too good a weekend by Reid not to earn him a flurry of offers. 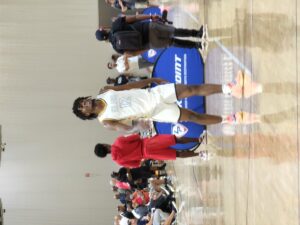 It’s his time down on the southside off I-75 after years of being a top talent on a team full of guys ahead of him, the ’22-23 campaign will be his to guide as he’s always been one I’ve thought hasn’t received the true billing he deserves despite often appearing in reasonably high spots on rankings boards around town, love the ability to run a team with ferocity and yet precise control while always being a threat to take over a game with scoring or on-point defense, a power-packed 6-2 with lightning quickness he’s been the full package to me for years now and after a terrific first weekend at LakePoint the coaches in attendance began to see they’d better get on board with offers before he’s gone. 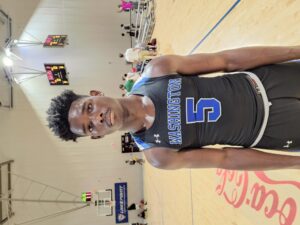 Still just a junior it’s been a real treat watching him develop the last 2 years as he was hard to miss even as a freshman starter for the Bulldogs, the incredible work he’s put in on his frame has only made the package more dominant as there were times out there at LakePoint where it was straight up man vs boys reminding me a bit of how former Pace star and now Cincinnati Bearcat Josh Reed used to toy with people, he can play the power game and bull through folks but has great movement and an explosively powerful set of movements around the goal that always raise eyebrows and impress evaluators, he’s not nearly the secret he was even last summer as his play has been too good and next spring will definitely be his time to take the large leap onto D1 recruiting radars. 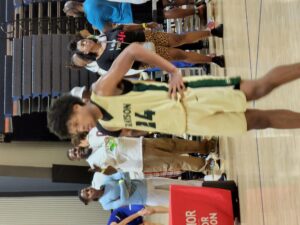 This young Rams team may have a new look but neither the youth nor the new chemistry being developed seemed to deter them from being among the best groups I saw all weekend, at the forefront without question is Harris as he has the look of an assertive leader and one fully capable of handling a large load, there’s plenty of size around him with senior Chad Moodie looking strong and healthy and 2024 Jayden Williams arriving to join 2025 riser Amir Taylor but as has been the case for years now it’s the guards that drive the Rams, 2024 Anthony Alston comes over from Dacula to set up one heck of a backcourt combo in green and gold and Harris will benefit from all of that surrounding talent with a chance to show off the full gamut of his burgeoning full-court skills. 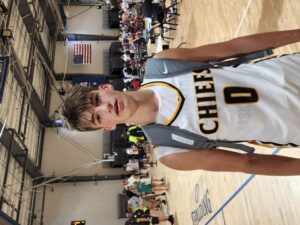 Having had the chance to see his development over the last 2 years pretty close up it was a blast to see Parker now becoming the player at the center his talent has dangled for years, handling the point or playing his more comfortable wing spot he has taken on the mantle for a Chiefs program that said goodbye to a key group of seniors from last year’s semifinal run and is breaking in some interesting but young new faces, Parker saw some good competition all weekend but never turned the dial down from the high setting as he took and made big shots and assumed the role of the man with a real tenacity, the size and the guts immediately make him attractive as a prospect and now we add the positional versatility to the well-known deep shooting package, a Cherokee County must-see.