LILBURN, GA – We move to Part 2 from last Saturday’s Grayson New Year’s Classic, with more eye-catchers from the 5 games.

The likes of Maalik Leitch, Jet Horne or Jacob Washington usually draw backcourt headlines for the Comets but Walker stood out Saturday, plays a little like Horne in the way he penetrates with speed and daring, like all SGHS guys he defends like his next meal depends on it, the kind of guy that fits and has bought in all the way to the culture Coach Howard is building there.

The work of vets RJ Godfrey, Thomas Allard and Dylan Gary is consistently strong and clutch but lately Clayton has put his stamp on the Dawgs success, always been much more swift and nimble than he appears wrapped in that big frame, really creative around the basket to go with a forceful approach off the catch, super soft hands and a good passer he can also knock down the 15-footer when left unattended, an unquestioned key part going forward of what could be a run at it all in 7A for NGHS. 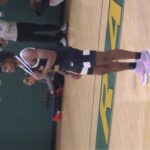 You can make the case he doesn’t get the love classmates Isaiah Collier and Kanaan Carlyle get despite being ranked not far from them the last 2 years, for my money he’s just as “valuable” to his club as those other two stars with a clutch nature and willingness to take over that echoes what we see nightly from other top 2023 star guards, there just isn’t a whole lot to negatively dissect in his game as he frankly checks all the boxes, just has been so impressive to me from day one and was again Saturday in a thrilling & tight OT setback vs top 7A foe North Gwinnett.

Around the core senior trio of Chauncey Wiggins, Tyrese Elliott and Caleb Blackwell are several young stars who have matured so well and taken on much larger roles as the Rams begin to hit their stride, Harris in particular has elevated his game and unleashed a lot more of the arsenal, over the last year or so the deep shooting was immediately noteworthy but now with an upperclassmen’s frame he has taken his game at the rim more and done it with serious aplomb, has always had star qualities and now we’re seeing it come to the forefront. 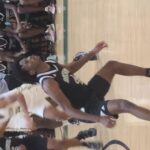 When watching Forest your eyes most often are drawn to the startling athleticism of D’ante Bass or the sleek versatility of 2023 Qurahn Anderson, Saturday it was hard to miss the activity level of Scott at both ends as he defended with vigor, hit the glass against a big Grayson team, and finished at the other end with good power, the Knights appear the class of the underrated Savannah-area and a sure-fire 3A favorite with Scott and others playing so hard in support of their stars.

Keith Agran has lived in Georgia since 2011 and joined OTR as a National Evaluator in 2021. He previously scouted for Prep Hoops dating back to 2019 and has both a championship-coaching background on the HS-level and daily newspaper writing experience, both from New Jersey. You can reach him at keithagran1@gmail.com and follow him on Twitter @BracketSage