GRAYSON, GA – Yet another deep showcase filled with top GA teams went down last weekend at Grayson HS, and while many of the star performers shined brightest, there were plenty of clutch performances by key glue guys from these rosters. 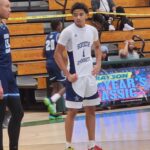 With experienced and skilled senior guards all over the place it’s constantly been a pick-your-poison recipe when facing the Comets, Redmond though is the straw that stirs and seemingly always comes up with a big play or pass or late shot to get you back in it or seal the game, calm and cool he was made for their system of up-tempo offense and suffocating defense, like all on this roster a superb on-ball defender and one of the more underrated floor leaders in the 2023 class.

Sitting with a bunch of scouts I remarked before the game that Johnson is such a key for the Longhorns because of how experienced he is and how many different things he can do, he then went out and got 8 first-half points and continued showing off the kind of seasoned play he can give you at both ends, has the look of a college-ready guy whether he has the ball in his hands up and back or playing off the ball and making sound decisions, will be a solid 4-year college player. 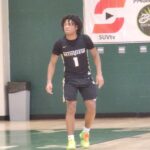 Big fan of the style played by the Bears and running the show most times down is Blair, love his feel and vision as he marshals his team through a possession or one of their patented fast breaks, not an overly big team MVHS makes up for that with incredible hustle and Blair with his deep shooting and fearless driving keeps things moving and is an emerging name to track.

Patiently waited his turn to be in a now feature role alongside classmate and star David Thomas, McKennie brings a ton to what is another monster 5A Eagles contender, relentless push whether it be on the defensive end where he is lockdown or on offense where he plays at the rim with a ferocity and fearlessness that is signature ELHS, will be right in the mix of key guys should this program capture another banner. 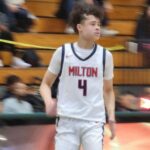 Seth Fitzgerald has stepped into the main man role for this Milton bunch which has surprised some folks with their superb start, backing Fitzgerald ably and getting better each time I see him is Illinois-transfer Rush, mixes good but not-off-the-charts athleticism with a keen eye for scoring chances and a stroke that can stretch defenses, he’s guarding multiple spots for them as well with this being a smaller Eagles bunch and that has been a key as well.