Many of the top players and teams in the state of Georgia participated in the Hawks-Naismith Classic. Photo – Ty Freeman

Norcross, Ga – The 2ndsegment of this year’s Hawks-Naismith Classic was held at Norcross this past Saturday, bringing together solid teams from multiple areas of the state across different classifications. The stars came to play, others elevated their status, and young guys held their own. Here’s who impressed.

Overton hasn’t been in a Milton uniform for long, but his impact has already been undeniable. He gives them a post presence that the Eagles lacked before, making them even more difficult to prepare for. Overton carves out space down low and gobbles up offensive rebounds with ease, often converting on second-chance baskets after. The massive lefty has good dexterity and does not waste any time when finishing around the basket. His motor is solid too, which is always a plus for a young big man. Although Overton is a top football prospect, his future on the hardwood looks pretty bright as well.

The way that Primas adjusted and improved throughout the course of the game against Lambert was impressive. Early on, it looked like he was determined to prove that he had made progress as a shooter and ball-handler. Although he had some good moments doing so, I thought he went away from his usual style of play too much. Once the 2ndhalf hit, and especially during the 4thquarter, Primas was a beast in the paint. He finished through contact and drew fouls time and time again as Central nearly came back from a 20-point deficit. Every time he got the ball late in the game, he went right to work and produced. Primas knew when his team needed him and stepped up accordingly. He appears to be more explosive athletically and in better condition. His performance was rewarded with an offer form Mercer following the game.

Quay Primas was tremendous for Central-Macon today against Lambert. He dominated the paint in the 2nd half after showing improved perimeter skill early on in the game. Looks lighter on his feet and in better shape. Finished with 32 points, 10 rebounds, and 4 blocks. pic.twitter.com/hzEYNZTHpG

In arguably the most anticipated game in Georgia this year, Schieffelin helped himself more than anyone. The Grayson-McEachern showdown was filled with high-level prospects and he took full advantage of the stage. I’m not sure when I last saw a block triple-double, but Schieffelin produced one on Saturday with 13 points, 10 rebounds and 11 blocks. His timing and effort protecting the rim was great throughout the game and proved to be important in limiting McEachern’s comeback attempt. I gave him “Best Rebounder” honors during the summer and it was easy to see why Saturday as he hauled in board between multiple bodies at different points in the game. Offensively, he scored efficiently on limited touches and made quick decisions. I’ve been on this train for a while, but he really deserves a heavier recruitment and an outing like that one in that type of game should make things move.

Ian Schieffelin was a complete monster against McEachern tonight and put up a triple-double with blocks: 13 points, 10 rebounds, 11 blocks. Swatted away everything at the rim, went through bodies for rebounds and finishes. Exceptional motor and physicality. So under-recruited. pic.twitter.com/VFEsuLtANK 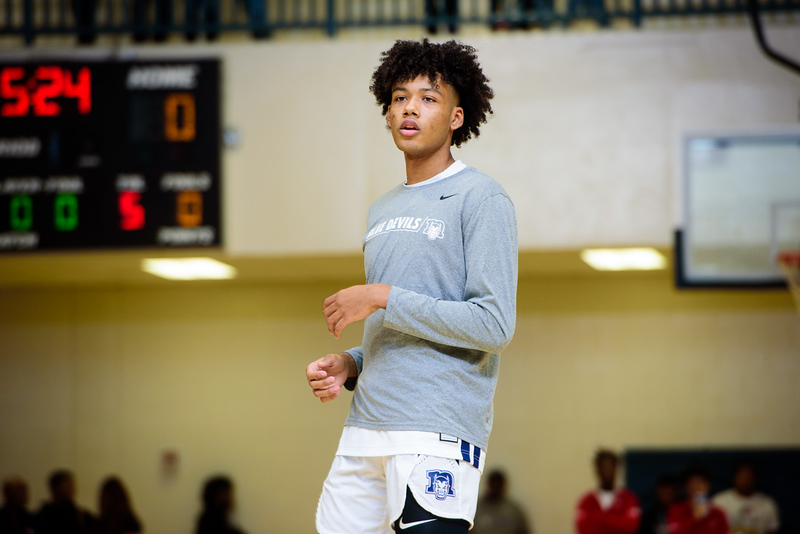 Considering the opponent, his efficiency, and his overall production, Ademokoya’s performance against Tucker may have been the best I’ve seen from him. He rained in 7 3’s and finished with 27 total points while also missing 4 shots from behind the arc. There was a stretch in the 2ndhalf where he went unconscious from deep, which allowed Norcross to build a sizeable lead that Tucker couldn’t overcome. Ademokoya was locked in for the entirety of this game, which he showed improvements on over the summer as well. Continuing to be aggressive and consistent with his energy and intensity will do wonders for him. 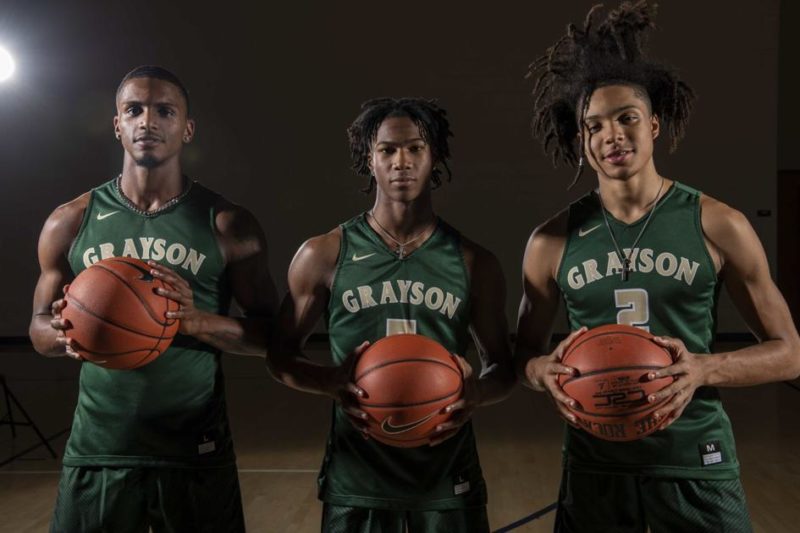 The Rams 3-headed perimeter monster of Deivon Smith (Mississippi State), Caleb Murphy (South Florida), and Toneari Lane (Wintrhop)combined for 58 points in Grayson’s huge 83-57 win over McEachern. All 3 got going early on in the contest and kept it up all night. They bring different dynamics to the team and give opponents’ nightmares because of their potential to individually score 20+ points in any given game. Smith did a little bit of everything and really showed some maturation in his game as a point guard and leader. As usual, Murphy was nearly impossible to stay in front of and finished on all types of layups inside. The perimeter shooting was provided by Lane, hitting 3 3’s while also giving them a physical presence. If they can continue to mesh and find balanced production between each other, there won’t be much that opponents can do.

After a quiet 1sthalf against Discovery, Brown knew that his team needed him to keep their lead and secure a win. He got himself going on the defensive end, excelling as a shot-blocker and rebounder in the 2ndhalf. His offense slowly came along and he converted on some important shots after halftime, ending with 15 points. You won’t see this type of game from many high school players; you aren’t having a great offensive game but still look to make an impact in other areas. Brown has this figured out and it paid dividends for him and his team on Saturday. 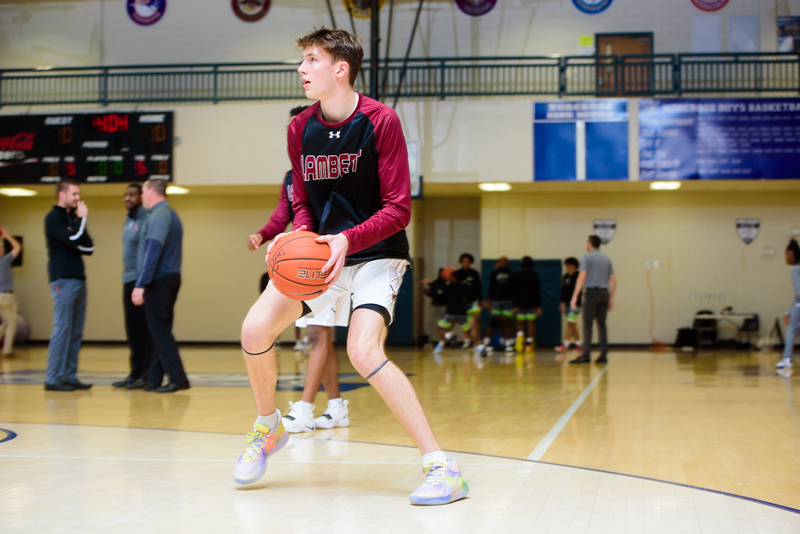 Similar to Brown, Champion’s best moments gave after the halftime break in Lambert’s matchup with Central Macon. Once he saw one drop, there wasn’t much that the opposition could do to stop Champion from the outside. He connected on 5 3’s, with multiple makes coming from well beyond the line. At 6’7”, Champion can consistently get off shots even when defenders are near. He looked for opportunities the entire 2ndhalf and it helped Lambert greatly. Champion led them with 21 points in their victory.

LT Overton wasn’t the only guy that played well in Milton’s win. Bruce Thornton was great once again, especially on the defensive end and shooting the ball. He’s one of the most consistent players that I’ve seen. Evan Hurst continued his upward trend for the Eagles, scoring efficiently and rebounding well for a guard. Cameron Walker and Seth Fitzgerald were really productive as well with their activity and positionless play.

Terrence Edwards put up 36 points for Tucker in the final game of the night. Edwards is a guy who gives 100% effort from the opening tip to the final buzzer and lacks no confidence. I would have liked to see him be more efficient, but he scored in a variety of ways and sets a good example for his team with his approach to the game. Edwards has a unique package of finishes at the basket, in-between shots, and deep jumpers off the bounce. There are few better available players in the state.

There was a plethora of under the radar seniors who had productive outings on Saturday- Will Baker (Lambert), Jarrett Walton (Southwest Dekalb), Walt Dixon (Gainesville), and Charles Blamo (Discovery) to name a few. Baker and Walton both man the PG spot for their respective teams. Baker is an exceptional shooter who makes good decisions and sets the table nicely for the Longhorns. Walton has speed and quickness that allows him to make plays on defense and get to the basket often.

For Gainesville, Walt Dixon embraced the challenge of matching up with Jabari Smith. Although he gave up a few inches to Smith, Dixon was physical and fought hard for rebounds while also giving solid offensive production on his way to a double-double.

Blamo gives the Discovery Titans an undersized but tough player who doesn’t really have a true position. He gets physical, does the dirty work, and positions himself well off the ball. He has been quietly effective for Discovery this year.