TAVARES, FL – We move from the morning to the afternoon Showcase in our coverage of Hoops Exchange’s Fall Festival from Sunday Oct 3 at The Big House, Part 2 here with a Part 3 on the way.

Here are some Florida-based dudes who brought it in a high-flying, entertaining afternoon:

The 2024 was quite possibly the best overall player I saw all day and certainly among the best college prospects there, saw him this past summer with the South Florida Kings playing up on 16U and he was just as explosive and high-flying then as he was Oct 3, just get the ball somewhere up near the rim and Edgecombe will go and get it, is a slasher extraordinaire cutting up defenses, also showed off ample 3-pt shooting range when things slowed down and can guard the entire floor, has big-time, high D1 potential. 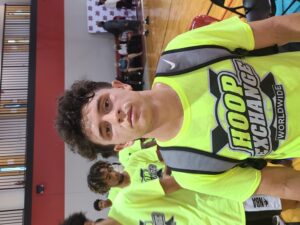 Playing with Edgecombe showed great composure and understanding as he didn’t let size become a factor at all in both his fight and his ability to carve you up off the dribble, the day’s best passer by far and a true floor general in how he runs a show, brings a ton of confidence within that 6-0 package and can fill up the stat sheet in multiple categories including with some edgy on-ball defending.

The youth movement continued with Jasquith also playing with the stacked Edgecombe/Macgregor team, long strider he was smooth as a finisher both off the break and attacking the baseline, looks and plays a lot bigger than 6-5 and has the look of a player whose pretty darn good as a sophomore but will really be something as a senior. 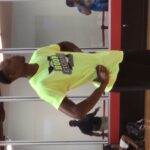 A 4th member of that same Showcase team with Edgecombe, Macgregor and Jasquith and it wasn’t even fair for the other teams at times, powerfully built with a frame that will travel to any program that wants a freakish athlete who backs that up with a seriously high work rate at both ends, at his best from 8 feet and in right now but that is something that can be developed and the other tangibles are too enticing at his size to ignore. 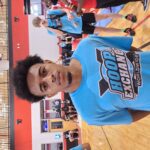 Yet another sophomore in what is clearly a stacked class in the Sunshine State, another high-flier who really explodes off the deck in a hurry on the attack or in the open floor, can play either guard spot and does it with a ton of moxie, he was so effective blowing by and over folks I didn’t see a ton of deep shooting but if that’s also a component he can unleash then the future is very bright for this stellar athlete.

Had one of the prettier jump-shooting strokes on the day, quick and fluid getting it off but never in a rush, the smooth lefty can play either guard spot for you and had deceptive speed despite appearing to be gliding along.