Tyrin Lawerence shined over the weekend at the Hoohall Prep Showcase.

This past weekend in Massachusetts marked the first year of the Hoophall Prep Showcase at American International College. The main HoopHall event in Springfield brings out the best prospects from all around the country, but the Prep Showcase had a collection of exceptional prospects as well. Here are 5 of the top 2020 prospects who participated in the event and impressed with their play during the course of the weekend. 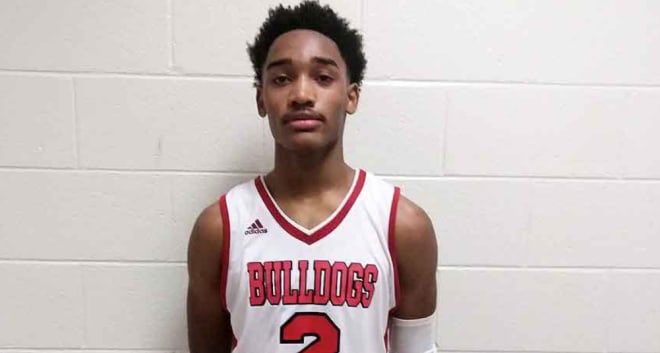 A 2019 Morgan County graduate, Lawrence was a well-known prospect during his time in Georgia. He has used his post-graduate year at Sunrise to significantly elevate himself as a prospect and has taken advantage of multiple big stages to prove himself. Although he is a respectable athlete, Lawrence isn’t a guy who will blow you away with a bunch of highlights. He has always been a versatile player and looks to have enhanced each of his tools since making the move to Sunrise. Lawrence is shooting better from 3, facilitating and initiating the Sunrise offense, and using his smooth lefty game to score off the dribble as usual. His improvements and performances this winter have resulted in a plethora of HM schools vying for his services.

Another skilled lefty, the game comes easy to Miles and he can put up points in a hurry. He has great positional size as a 6’6” SG, which helps him on the offensive end. Miles is a good shooter who gets clean looks over smaller guards with ease. He elevates well and is comfortable from beyond the arc and off one or two dribbles in the mid-range area. Miles is pretty thin but gets to the basket with long strides and his height and dexterity help him convert inside. He also showed ability as a rebounder and defender by using his length effectively in IMG’s game against New Hampton on Saturday. With his ability to create offense, if Miles can continue to assert himself like he did at the Prep Showcase, he’ll have a very nice college career. He’s one of the better available wings in the 2020 class.

N’Guessan’s versatility and long-term potential at 6’9” are attractive and coaches are taking notice. He left the summer with a handful of offers, but N’Guessan’s recruitment has now been taken another level. Virginia Tech, Washington State, VCU, and DePaul have all offered him over the last 2 months. N’Guessan has capable perimeter skill with an effective outside shot and the ability to slash from the wing. Although he needs to add weight, N’Guessan isn’t weak or soft and has the touch to score in the post against bigger forwards. Defensively, he is active inside and uses quick leaping ability to protect the rim and rebound, where he can then handle himself in transition. It may take him some time, but the level of recruitment that N’Guessan is receiving is warranted.

Springfield Commonwealth picked up 2 wins at the event and Odukale was superb in each. He left his mark on the event with a dominant showing in Court 2’s final game as Springfield defeated Massanutten. A strong 6’5” guard who can do just about everything, Odukale poses a matchup problem for most opponents. Odukale rebounds at a high level and really pushes the break after snagging boards. He attacks the paint with aggression and finishes with physicality, but is also an effective distributor. Odukale can also wreak havoc on defense because of his size, length, and ability to move as a guard. He constantly gets his hands in passing lanes and disrupts ball-handlers to ignite transition opportunities. Odukale doesn’t seem to ever slow down and has some really good qualities for a backcourt prospect.

After not having his best game on Saturday, Ousmane stepped up in front of tons of coaches as Scotland faced off against Sunrise on Sunday. Ousmane has a wide, thick body that is hard to move and allows him to create separation from his defender and the ball when he goes to work on the block. His body is an asset on the other end also as he can carve out space and secure rebounds easily. Ousmane moves pretty well for a guy his size and is able to operate further away from the basket and put the ball on floor. He even  knocked down a 3 in the Sunrise game and displayed a solid overall skillset for a post player. Ousmane’s motor is pretty good right now but as he continues to improve his conditioning and redefine his body in college, he will be even more of a problem. Once committed to Cleveland State in the Class of 2019, Ousmane has already made strides with his body during his post-graduate year and has seen his recruitment pick up, most notably with Texas A&M extending an offer.