WARNER ROBINS, GA – Middle Georgia got some love from the OTR staff as we headed south from Atlanta Sept. 26 to the beautiful, new basketball and multi-sport North Houston Sports Complex.

The folks at Hypesouth Hoops had some of Middle and South GA’s top names in attendance, and we highlight 6 below who were too good to miss:

Most polished and college-ready player there, big guard with good movement and a frame meant to travel, can play inside or out with a nice array of catch and turn moves in close and a super soft touch out past the arc, glides up and down the floor but possesses a shift to power-mode getting to the basket that had no answer on the day, certainly athletic enough to guard multiple spots and at 6-5 that ups his ante, good-looking prospect who will get even better at the next level. 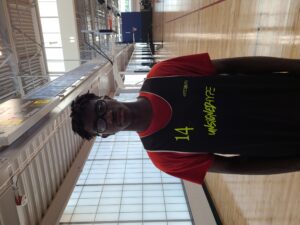 Imposing size and body, terrific getting up and down the floor in a rim-running role, offense was tight in close as he was a bucket from 8 feet in, the feet and lateral movement on the offensive end are immediately enticing, the offense was ahead of the defense to me as he struggled a bit with timing and finding the right moments to impose his physical will near that rim, with 2 years to hone that aspect he’ll certainly begin obtaining quality looks and has massive upside to become a serious frontcourt contributor at the next level. 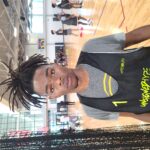 Elite athlete with speed to burn and big-time hops to unleash, has an explosive quality that can be a real weapon in the halfcourt or coming downhill off the wing on the break, can play either guard spot and post numbers, would like to see him back off the highlight-reel stuff and harness the incredible athletic gifts into a more sound approach, minus the sometimes unnecessary flash there’s a ton to work with and utilize as a multi-faceted backcourt piece. 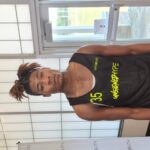 So much to like about this sophomore, great worker to augment a growing skillset that with his length offers a lot of lineup flexibility, he can be your main post-up guy with his back to the basket or catch from 10-12 feet and knock one down, best rebounder I saw all day with really sticky hands, has a bit of handle to get by people and was really impressive as a young shot-blocker with crisp timing, extension of his shooting range vaults him quickly to the next level.

Looking the part of a seasoned PG despite being among a small handful of 2025’s on hand, great awareness to go with a slick handle that allowed him to slice through traffic and control the pace, can hurt you as a penetrate and dish guy or a shoot-first PG showing off multi-level range and no fear of getting all the way to the cup, his on-ball defense is not hindered by size as he again makes up for that with a really natural feel for the game, one to watch down near the GA-FL border. 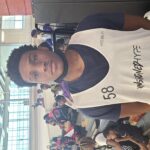 Falling in between positions may affect his looks but not his play, he plays the game like an undersized power forward would – utilizing his superior athletic ability to outwork folks or simply overpower them with his strong frame,  has a patented baseline drive that was once again on display as he motors by you, despite only 6-3 he was with also among top rebounders as he gets after the ball and secures it with clamp-down hands, bit of a steal for a small school looking for versatility.