KENNESAW, GA – Kennesaw State Head Coach Amir Abdur-Rahim and his staff put on another highly competitive June team camp on 5 courts over 2 days this past weekend, and some of GA’s top returning and emerging talent were on hand. 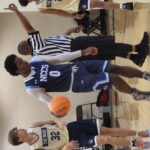 Almost couldn’t miss as he was on point from the arc all the way to the basket in a pretty dominant early morning performance versus a good RiverRidge bunch, much of the debate on Wilson is where he’ll play at the next level and subsequently who he’ll guard but he looks quicker and leaner and at a legit 6-5 can challenge to be a low to mid-major D1 player the way he goes to work on the boards and can score it from multiple levels. 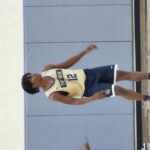 Bull by the horns time for Hansraj and he looked primed Saturday morning for the lead role on what will be an intriguing RRHS team breaking in some talented 2024’s to join Hansraj and fellow 2023’s Jay McCord, Greyson Hopf and Hunter Apple as key returnees, the lefty has always been a creative scorer but now the soon to be senior has the body of a more mature guy and can combine a real nifty nose for the rim and more of that legit physicality to be a real eye-opener to next level programs. 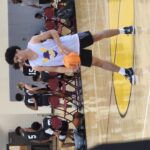 Reed’s best attribute aside from being such a heady and smart player is his seamless ability to play either guard spot for you, love the way he so calmly assesses as a lead guard taking his time but possessing plenty of blow-by to create space for himself and others, then he slides over to the wing using that same speed off the bounce to get to the hole or use a very sound jumper to force you to think, the Vikings looked athletic and played with spirit and Reed could see a jump in attention if they can translate that as a group to next winter. 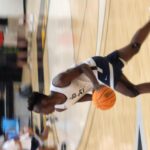 No Bryson Tiller, Kendall Evans, Ben Leach or Davis Rice but it did little to deter the blue and white as the Knights inserted other interesting faces (rising 2025’s Jackson Ferry and Chandler Bing prominent among them) and Moore and stud 2024 PG KJ Greene Jr took the lead, with extra space to work sans the graduated Josh Reed and a seeming green light to show off his versatility Moore looked comfortable facing up and knocking down the J more often to go with his spin and wiggle drive game, it was the kind of day that surely drew more eyeballs to him first and led predictably to an offer from host KSU and now more recently interest in the last 24 hours from Longwood, Air Force, App St and Liberty. 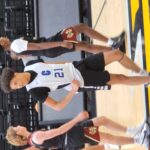 Was hoping to see and received from Warren immediate more aggressive play as he will be asked to step into massive voids left by graduation and program losses, lurking below as a sophomore last winter was a wiry but potentially highly effective scoring package that is full of inside-out possibilities, he’s got a potent drive game to go with deep shooting that has to be marked, somewhat forced to make more plays certainly right now in the June water-testing stages he along with 2023 PG Jonah Hibbert will use savvy on-court instincts to help along a bunch of new Knight faces. 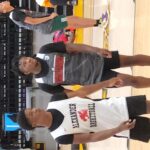 Down went 2024 star Micah Smith with an ankle very early in their first game but up stepped their deep stable of guards led by 2023’s Newson and Jaren Alexander and 2024’s Amari Brown and PJ Green, this gives the Pats all kinds of quality depth to play the kind of pressure defense they’re known for, Newsom even with Smith and Brown in particular garnering a lot of notice continues to impress with a college-level game at both ends and can lead your team from the point or show excellent scoring variety off the ball. 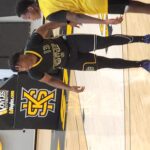 Don’t be fooled by the linebacker frame as Moody has been for some time putting his name in the hat as one of the top pure shooters in the state, consistently he has been a bomber who can get rolling in bunches and uses that stoutness to his advantage, the release is quick and pure and whether it’s with travel team Tri-City Elite or over the weekend with the Greenwave Moody remains one of south GA’s most underrated must-see guys. 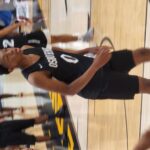 Quite a few faces have begun to assert themselves in the ’25 class but few if any have been more consistently impressive or have so much yet to unleash as the Cardinals and Atlanta Celtics star, no Justin McCarter or Jon Carroll Saturday at KSU so Fleming and good-looking 2023 guard Kevin Hicks were at the forefront, not a stretch to think he’s soon to be entering territory where as early as next year this time he could be regarded as one of the top 10 players in the state regardless of class, that’s the kind of production the sleek and smooth guard has been posting and the kind of mysterious and exciting upside that is still yet to be unveiled.