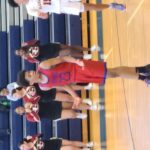 The Raiders already boast one of the true bonafide stars in the 2024 class in Karris Bilal, but seeing Leonard alongside the prolific scorer was impressive. He can easily play either guard spot as does Bilal and has a slithery nature that makes him a tough stop getting as the basket even as just a freshman. A heady defender as well, this has rapidly become one of the better young backcourts to watch in the ATL-Metro.

I caught some of Kirouac last summer and he stood out both as a clever interior scorer and rim-protector. He clearly added to his arsenal during his sophomore season with the Raiders and became a big-time part of a potent inside-out 1-2 punch with senior Aidan Kudlas. As he adds strength the work in close will get easier because all the craftiness is there, plus he fits the stretch forward mold well with more than ample 3-pt range. 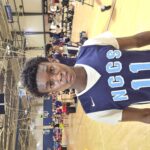 There are naturally to be expected freshman mistakes, but this is undoubtedly one of the state’s best freshmen at any position. The way he can push pace and be effective in traffic, and at other times pushing too hard, he’ll find his way with that item and when he conquers it he’ll be an even more effective scorer than already is. Which is a very potent and advanced weapon on the offensive end.

This is a name that is known to some and one I actually saw earlier in the season as well, but he was bottled up pretty well that night by Shiloh. Last week against Habersham Central in the Regions he showed off some of the often spectacular work of a polished and explosive attacking guard, one who can back you off with pace and then knock ’em down from near unlimited ranges. Quickly has emerged with that dynamic skillset as one of my must-see guys for this summer.

With a couple of months of performances under his belt it’s finally time to give the due to this uber-talented transfer from Florida. Seeing him twice as well, he did better than I expected immersing himself into what was already an established lineup of strong players, and most of that has to do with his exceptional versatility as a ballhandler, passer and inside-out scorer. It’ll be fascinating to see him up here this summer with TSF as well as the main man alongside Bryce Pittman and Brannon Gaines next year for the Raiders. 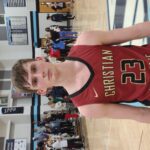 Classmates Zundra Jackson and Cash Hare are names to watch for sure as well, but what a treat it was to catch Abernathy after seeing him summer during June Live Period camps and being totally enamored with the possibilities in his game. He’s taken another step forward, scary in that his frame is already pretty stout and he has 2 years to go. Add to that a variety not often seen from a player this young, and you’ve got one of the real gems of a deep 2024 guard group here in GA.

It’ll be a very different-looking Wolverine lineup next year with some big senior departures, leaving Moore to likely take on a bigger load. He’s more than capable and up to the task, a gorgeous stroke from 3-pt land and some serious lift off the deck means he can terrorize you in the open floor or just keenly spot up and dagger you from the arc. Among the top risers in the 2024 class. 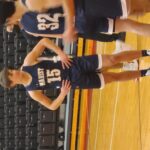 Younger cousin Ty is a freshman at Blessed Trinity and can shoot the rock as well, but Luke has looked particularly comfortable in the new regime’s fun system at Marist and he will be back with several others on what is a good-looking young nucleus. Very comfortable as a wing bomber, wouldn’t shock me to see his game expand to other levels as the genetics certainly suggest special possibilities and the skill is there to have a breakout summer and junior season in ’22-23. 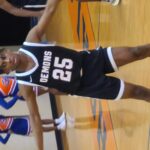 Tons of upside with a really solid understanding at a young age, looked really comfortable as an attacking wing contributor playing with what is a veteran WR squad. Easy to spot the ability to become a consistent scoring threat from multiple levels as he matures for this really good program down in middle GA.

Settling in with the Pats after some movement earlier in the season, Mitchell looks like he’s solidified his spot as a rotational guy for the 7A contenders. Built like a Mack truck, the powerful wing has always been full of confidence and moxie and has a multi-level game that is sure to take off more this summer and lead into a season next fall where he can be with all the graduation losses the guy for Berkmar.