MARIETTA, GA – With the flurry or tournaments we get here in the Atlanta-Metro that span from opening weekend to just a few days before Christmas, the folks at the Lemon Street Classic have turned this annual event into one of the best.

Fun for evaluators no doubt, there’s the history behind the tournament, the hospitality shown to media and the teams, to of course the always intriguing intersectional and in-town matchups, however you slice it up it’s a first-class event and a privilege to be there.

Here are the first 5 team capsules and the players who shined within them from the five games I took in Monday: 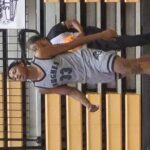 LANGSTON HUGHES (6-5) W 53-47 vs Etowah >> Of late a haven for athletic guard play and sterling defense in Fairburn, and that hasn’t changed, but on Monday it was 6-7 junior forward Jelani Thurman who impressed me the most. A good-looking athlete himself, he was an active mover both in transition and around the basket, where he gobbled up 2nd chances and was too strong for a disciplined but undersized Eagles bunch. No John McQueen or Tim James in this one, and Thurman was up to the challenge in a depleted frontcourt. But Hughes will live and die with their guard play and the intense on-ball defense they’re known for. Randy Latham and Kobe Davis give them some explosion off the wing and into the mid-range, with Davis in particular one of those bunches scorers who can change momentum and did with all of his 10 points in the 2nd half. Jorin Williams (and brother Jaren not playing on this day) have a steadying veteran influence at both ends as seniors who have been through the wars for Coach Rory Welsh. The Panthers played another strong game Tuesday in a one-point setback to a surging North Gwinnett team. 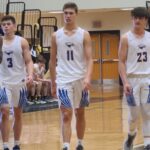 ETOWAH (5-8) L 53-47 to Langston Hughes >> That record in no way indicates how good this team is, as they’ve braved one of the Metro’s most brutal slates to this point, with the likes of Grayson, Archer, Milton and Sequoyah and Alexander (36 combined wins among them) among their setbacks, but also boasting quality wins over Ridge Ridge, Galloway and Tri-Cities. Pace and 3-pt shooting are the recipes for the Eagles, who play 6-5 Josh Hughes at center and 6-5 Mason Etter floating as a 4 and even 5-man against bigger teams. Both are excellent defenders, with Etter drawing what seems like 3 to 4 charges every time out, but it can be a difficult ask for those two to carry all the frontcourt water. Still, Hughes has been having a solid senior season, and Etter is so versatile offensively with an array that covers the full gamut of shooting ranges and craftiness in closer. Brandon Rechsteiner’s fast ascension as one of the state’s best 2023 guards has been fun to watch and warranted, and when senior Dajaun Devonish and sophomore marksman Dimitri Angelakos get cooking alongside him this team can roll up some big numbers, and while the schedule in January region play doesn’t let up much (and a neutral date with Buford Jan 29), this team has the tools to be right in the mix. 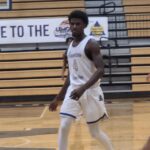 AMERICUS-SUMTER (10-1) W 58-56 vs River Ridge >> It was size against speed in this one, as Kyric Davis and crew got the last-second win over a towering Knights frontline with 2 guys 6-9 or taller. Davis’ 10-pt final qtr including the game-winner highlighted how the Panthers whittled away at River Ridge and snuck out the close win. Davis and guard Cameron Evans are superior athletes, the 6-4 Davis doing most of his work around the basket and above the rim, where he can be really explosive and was impressive too in those areas at the Cam Sports Showcase at Lee County HS back during the fall. Evans was a knockdown king in the mid-range on the way to 13 pts, and was smooth and effervescent in the way he carved up the Knights. And don’t sleep on slithery junior guard Brandon Pope either, he was clutch late in the game as well and had all 9 of his points in the 2nd half. Doubt these south-GA teams at your own peril when they come into Atlanta, evidenced by Sumter winning their bracket with yet another win over Cypress Bay (FL) the next day. 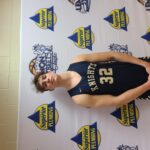 RIVER RIDGE (8-3) L 58-56 vs Americus-Sumter >> The Knights head to Christmas with good momentum despite the close setback to Sumter, as they headed into that one having won 6 of 7 and bounced back from the Monday loss with a strong win over Collins Hill Tuesday. Seeing their bigs combo of seniors Braden Pierce and Jared Russo more in command of the ball was refreshing, as even if we know they can’t touch it every possession, the space and ability to catch in productive spots mean those two can take advantage of their skillsets. Russo had a big game against the Panthers, knocking down a pair of 3’s and finishing with 25 while playing with great effort against a pesky and high-flying bunch, while Pierce continues to show his vast improvement in offensive variety to go with his already stellar defense, rebounding and passing. Guards Grant Portera and David Hansraj have shown each can go on a run, Portera breaking down the defense and using his athleticism, and Hansraj as a 3-pt shooter and power driver. 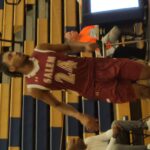 SALEM (6-3) W 62-46 vs Blythewood (SC) >> Twice now I’ve seen the Seminoles and twice I was really impressed. 2024 guard Clark Mastin is the big name, having garnered attention around town at various showcases, and he’s an exciting young guard prospect who has explosive movement out on the floor and shooting touch well past the arc. But twice now it’s been senior 6-6 forward Brandon Kincaid really standing out to me, a whole serious load to deal with in tight who has the body and game to play up through lots of contact. He’s joined on a frontline by Jeremiah Flournoy, yet another athlete for this 3A crew, and the two can own the boards and get up and down the floor like guards. Joining Mastin in the backcourt is another good-looking sophomore in Jakorri Arnold, and the young duo is buoyed by senior Jacari Porter as well. Both he and Arnold are so athletic and show nice burst off the dribble, they make for an effective complement as Mastin pushes the pace and breaks down defenses.