FORSYTH COUNTY, GA – This is the first in a series looking at some players from ATL-Metro counties that I got good eyes on this spring and summer to categorize as breakouts and therefore must-see talents as their enter their senior seasons.

We start with 2022’s in my home county of Forsyth, where there may not be a ton of high schools (8 public) but players always seem to emerge from this 2nd-fastest growing county in the state which is as high as 25th in the country in some growth listings. (players in no particular order):

So glad I got over to see BCB work out back in late March and stumbled on Kudlas from a No-Fo program I hadn’t spent any time around in my prior two seasons on the Metro beat, Sam Allen’s BCB program is heavily populated with guys that simply know how to play soundly and possess all kinds of sneaky skill, Kudlas fits that mold to a “T” with his sly athletic ability which at times this AAU season showed up in the form of a highlight-reel jam or high-rising rejection out of nowhere, it’s that level of athleticism that frankly takes him to the level where he becomes a must-see recruit because at the next level coaches can mold and hone a player’s skills (he has ballhandling and range out to the arc) but you can’t turn an average athlete into an exceptional one. 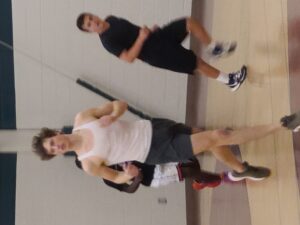 More than once Moore wowed me this AAU season with his electric lift and ability to absolutely dominate the glass, he has the length of someone closer to 6-10 and uses it to great effect on the defensive end as well as a shot-blocker and influencer, the finishing ability around the basket and soaring in from the wing on the fast break are both exciting and tantalizing for D2 and D3 programs looking for a supremely mobile big guy with a frame designed to endure interior action, will team at West with two more notable 2022s in 6-7 Jake Mooney (ATL T’Wolves) and sharp-shooting wing Caleb Lesch (ATL T’Wolves), and on that Wolfpack 17u club he played alongside 6-6 Peyton Law of Calhoun, another breakout athletic prospect who is definitely worth a ride as well up to the northwest corner of the state.

Coach Tyler Whitlock’s Dane program will benefit greatly from transfers as he added European-import Kapic and 2023’s 6-8 Keinan McFarlande and 5-11 Chad Molloy from the Virgin Islands, this was already going to be a solid Denmark team with seniors Kourtland Tolbert and Jayden Hilliman leading a scrappy group of spot-returnees, but with Kapic and his advanced low-post game and sweet-shooting touch out to 3-land things got a lot more interesting over off Mullinax Rd, with a wide-body and superb instincts at both ends Kapic has a chance to be the lynchpin of a playoff run which may surprise some folks in 7A.