FORSYTH COUNTY, GA – Continuing our summer look at “Must-See” guys by counties, we stay in Forsyth and look at incoming juniors and sophomores I’ve seen who are either ready to take the next step or are potentially set to emerge from the ether and gain a foothold on the recruiting scene (in no particular order).

Speed to burn and plays an exciting brand of ball at both ends as he can cut up defenses on the attack and guard the ball with some serious energy, can play either guard spot and it’ll be fun to see him under a new staff perhaps blossom with the stage in Suwanee more in his hands, will combine for an interestingly underrated backcourt with fellow 2023 James Tyre and 2024 Hebron Christian transfer Javyn Smith.

A transfer from the Virgin Islands I caught a little bit of him at Session 2 of the GBCA Camp back in June, showed some polish and was impressed with the crafty decision-making as he’s surrounded by proficient finishers at all angles (Kourtland Tolbert and Jackson Gibree on the wings, Jayden Hilliman and fellow transfers Nordin Kapic and Keinan McFarlande inside), set to potentially step in for Denmark-great Sutton Smith and under superb Coach Tyler Whitlock I’d expect him to be one those emerging 2023’s in the ATL-Metro. 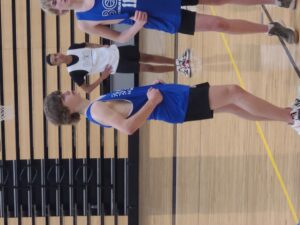 Really stood out when I saw BCB at their combo workout at the end of March as he could have easily played with the 17’s even as good and deep as that group was, deft left-hander who can really score it from multiple levels with some flair to go with a power-packed frame that gets into and through traffic, posted some monster scoring-performances this summer and can beat you from long-range or quickly become a pass-first PG when needed, combines with 2022 Aidan Kudlas at NoFo for an entertaining potential backcourt.

Taking nothing away from his older brother 2022 guard Ethan, who’s been an underrated yet skilled sparkplug for SoFo for the last two seasons, with Devin McGlockton gone guards aplenty are likely to inherit the mantle for the War Eagles and Caleb will seemingly play a lot alongside Ethan, while poised Ethan does the lion’s share of his damage from the arc and with his sound decision-making, Caleb is perhaps a little more of a versatile and physical downhill athlete who even at around 6-0 will give you a lot of different things on the score sheet and more even to help you win that doesn’t show up on a sheet.

Among a handful of players I saw this spring in visiting more than 30 workouts whose natural on-court gifts were seriously eye-opening, not unlike older brother Grant he’s a freakish young athlete who in watching him get around the floor (and above the rim) is quite simply a 1/2 step ahead of most his age, great enthusiasm and personality, building his enticing combo-game of good outside shooting range, an exciting drive-package and defensive versatility will be a lot of fun to watch as he’s integrated into what should be a sneaky good West bunch headlined by their sound veterans.