ATLANTA, GA – While some fall leagues have been cooking for several weeks, others were just getting underway this past weekend, so we headed down to Northside Drive for another year of North Atlanta High School’s superb league at their outstanding 3-court facility.

Another really good field is assembled there, and with my head on a swivel I caught a bunch of Week 1 action. 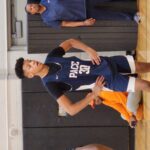 With Pace facing a Mt Bethel team with good size on the opening weekend it was immediately going to be interesting to see how the Knights were going to look minus 2025 forward Bryson Tiller, Bing has the look of a blooming star as he was super active around the goal after an emerging spring/summer with a good Tier2 Elite program, he’s gaining confidence with each successful trip out there and while perhaps not yet a nationally-ranked monster like Tiller can be a really good high school forward down off West Paces Ferry, he won’t have to do it all as the young talent flows at Pace with 2024 returnees LJ Moore and KJ Greene Jr and 2025 sharpshooter Jackson Ferry also looking like a young player on the rise. 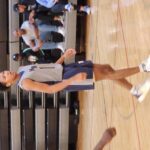 Quite a few coaches and onlookers were tapping me on the shoulder about Bell shortly after they tipped, you have to love the versatility and smarts which always has him standing out, when you talk multi-level scorers you truly count Bell in that category as I’ve seen him post up smaller guards with the fadeaway game and then knock down a pull-up from 15 off the break and then drop consecutive 3’s off of sloppy rotating defense, a good ballhandler means he can help in that category but you want a scorer like this in space with room to work, with 2024 riser Will Kuimjian getting him the ball and inside-out 2023 combo James White on the wing and 6-9 Mo Diao inside this could be a really intriguing Eagles team for Coach Cal Boyd. 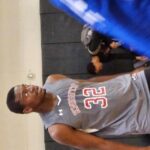 A new regime starts across from Piedmont Park this winter under outstanding GA Canes coach Isaac Taylor, it always looked to me last year that there was plenty of talent for the Knights but perhaps a volatile chemistry mix of 2022’s and 2023’s never quite got rolling, Wilkins will be interesting as an undersized 4 for this group as fellow 2023’s Will Hunter and Dylan Gustafson (both not in uniform Saturday) spend more time on the perimeter where those two athletes can surely flourish, Wilkins has good feet down on the block and plays a bullish style that is part mean and part sneaky skilled, swiss-army knife Bryant Graham-Davis should have more space to work his face-up game under Taylor and 2024 guard Charlie Kane got a taste of 5A action last year and will step into a large role both as a scorer and facilitator. 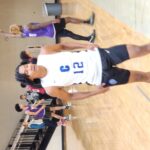 Having to face the Kentucky-like lineup Wheeler unveiled in the lay-up line straight out of a Big Monday broadcast on ESPN didn’t do a thing to thwart the confidence of Hibbert, he put 29 pts on the 7A favorites and did it with deep shooting well beyond the arc and crafty work weaving his way through the backcourt and frontcourt trees in Wildcat blue, he is quickly developing into just the kind of senior spark the Knights need while inserting some new faces into larger roles and leaning on 2024 Kennedy Warren and 2025 KJ Garris to help on O, but you can be sure with a leader like Hibbert that the well-schooled blue and black under Matt Barksdale will be ready night in and night out. 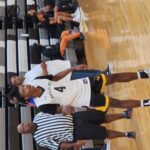 Every time I turned my head over to NA’s game vs South Atlanta it seemed Goode was doing something noteworthy as the notebook scribbles came fast and furious, looking so comfortable now as a senior with the ball in his hands and the 2022’s who dominated the action now off to college, he has a great mix of composure and burst both of which he used really effectively in directing the show and hurting SAHS from multiple levels, defensive IQ was also impressive, in a backcourt with Izaiah Louro and Nick Oliver each could be a huge key for the again undersized Warriors who when they play with the kind of intensity fiery Coach Kerry Sarden demands they become am much tougher out.