The Thanksgiving Showcase presented by OntheRadarHoops.com provided a chance for area teams a measuring stick before they hit region play in the month of December. It also gave our OTRHoopsReport.com evaluators another chance to watch to see which individuals stood above the rest. Here is the recap of game number three that featured Pebblebrook and Berkmar. 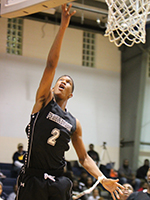 Coach George Washington and the Falcons of Pebblebrook have made an early season statement as the state of Georgia’s best team. Their performance on Saturday night solidified that opinion all the more as they ran away from Berkmar in a balanced attack on both ends of the floor. Pebblebrook was paced by EBA All-American Jared Harper with 20 points and 6 assists. The class of 2016 guard shot the ball in typical efficient fashion while also getting his team in the half-court set. Harper is joined in the back court by Clemson signee Ty Hudson. Although the left-handed guard only scored eight, his defense and leadership was key in the win. University of Georgia signee Derek Ogbeide was big in the win as he posted a 17 point, 12 rebound, five block evening for the Falcons. The 6-foot-9 center is every bit as important to this team as the guards are, because he allows for everyone to play aggressively on either end of the floor. Not to be overlooked was the play of forward Trhae Mitchell. The 6-5 unsigned senior scored 18 and did it slashing to the bucket and finishing in transition. Mitchell’s ability to affect the game on the perimeter and in the lane will be key for Pebblebrook’s success this year.

Berkmar was led in scoring by Josh Culver who finished with 14 points. The 6-9 center is signed to play at Tuskegee University next year and showed improved footwork and touch around the rim for Berkmar. Class of 2016 guard Josh Faulkner added 11 for the Patriots. Coach Greg Phillips was without one of his biggest offensive weapons on this night as sophomore Al Durham was out of the lineup with an injury.

Jonathan Hemingway is a National Evaluator for the OTRHoopsReport. He is also the publisher of CoachHemi.com. He has been involved in the community since 1996 as a coach, camp director and evaluator. You can reach him via email at JonathanHemingway@PeachStateBasketball.com and follow him on twitter @JLHemingwayPSB