Here’s the second group of four to come who created a whole bunch of buzz all weekend in the Sunshine State (in no particular order, GA guys have high schools in parentheses).

On an impressive all-around team that included All “Name” team guys and notable risers like Jackson Outlaw and Mason Sword as well it was Chamberlain’s good size around 6-5 for the wing and pure stroke that caught my eye that Saturday morning, shrewd in how he finds his way to spots along the arfc and dipped down inside later in the game to be a contributor on the glass and as an interior scorer.

Grant Chamberlain has the stroke and the measurables at 6-6 as @LoyaltyUnited_ 17U got the win over PHS, four 3s in his 20p and the easy release will definitely travel well to the next level#BattleattheBeach pic.twitter.com/efROkeK8F4 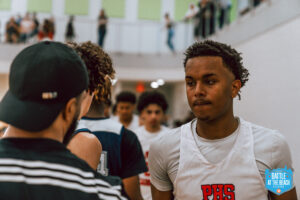 Entering the weekend Branch was on my radar after a performance last summer that was eye-catching in a lot of ways, the big guard is stronger and adds the now college-ready frame to his college-ready game, has high D1 upside the way he shoots it and uses a particularly strong lower half to move or plow through traffic to the basket, you can see the basketball acumen as he makes his way around the floor, a name to know for sure out of FL. 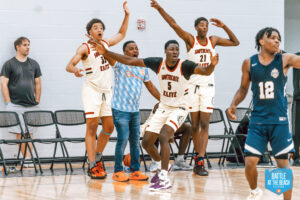 One of the marquee programs on hand the team formally known as Team Parsons had a deep pool of talent on hand yet it was the former Georgia Stars standout Charefant who was hard to miss early on, such an athlete and high-riser he can simply do things out there others can’t, he was dominant last summer playing 16U for the Stars and looks to have come a step further as that combo slasher and hybrid G/F who can guard a bunch of spots and be a versatile presence across the floor for you.

Not the only one whose eyes are drawn quickly to explosive athletes, after seeing him with the GA Stars last year and now with Southeast Elite 17U, Carl Charenfant always jumps out as he can be a highlight reel skywalker or has range to knock it down to the arc#BattleattheBeach pic.twitter.com/YYGam0DzOO 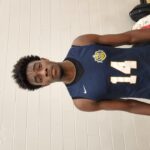 A lot of marquee names already on this list and almost no weekend in which 1Family plays can James be omitted from the standouts as his play is usually that good and that sound, in Winter Haven barely more than a stone’s throw from his own high school he showed off more of the jump-shooting game both with variety in the turnaround-J game as well as consistency knocking down open looks out to 18 feet, above the rim he’s dynamic and fun to watch at 6-9 and has all the tools to be a terrific D1 contributor.

Around the basket it's a well-known agile and high flying arsenal, but here at #BattleattheBeach were seeing more of @1FamilyHoops 17U Dylan James use the bounce to create space for a mid-range jumper package that is downright devastating@OntheRadarHoops pic.twitter.com/u7kuCRBotR 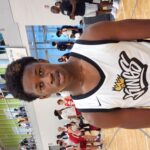 At least for me Edgecombe is must-watch material any tournament where the Kings enroll because you never quite know what this spectacular athlete might do in a game, well-documented is the elite lift that at 6-4 and the incredible natural gifts he uses to slither his way to big games of 30+ seemingly every time out, can shoot it out to the arc and handle either guard spot for you, unquestionably one of the most under-valued 2023 prospects I’ve seen in the entire state after being down there 5 times now for key events since last October.

19p in a win over Team Breakdown Broward for the always noticeable VJ Edgecombe of @SFKHoops 17U, it's a full court performance every time out as he puts multi-level scoring numbers up and utilizes elite athletic gifts to defend the whole floor if needed#BattleattheBeach pic.twitter.com/pZbQSZYu9H 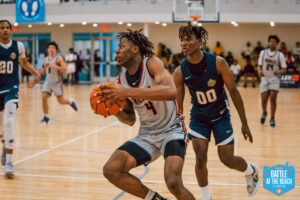 The Rebels once again well-represented among standouts with their scary depth of stars we’ll soon be seeing on ESPN and beyond, Allen played up with the 17’s later in the weekend and was just as noticeable for his physical dominance there as he usually is with the 16’s, in full form there almost isn’t a defender on any level opponent who is either capable or willing to get between him and the way he can power to the basket, an absolute man among boys in spots and even at 6-7 with all kinds of brawn can be a terrific small or power forward prospect.

The frame and the activity are so beast-like as Marcus Allen backs folks down or flies up to the alley-oop catch, quite the imposing @fl_Rebels 16U package as he asserts at either end and it's just all there for success as a D1 forward#BattleattheBeach pic.twitter.com/jI3p2XMaa7

Monster riser SG Isaiah Brown had another stellar weekend as well but it was often hard to draw eyeballs away from Wright as he soared all over the gym throwing down dunks, blocking shots or just wowing the crowd with his obscene gift of flight, add to that a basketball package that has slash and shooting and excellent defensive versatility around 6-5, all that makes it easy to see why he was an eye-opener and another name from a stacked 1Family program that has been running roughshod over multiple OTR events.

On a 2024 @1FamilyHoops team whose headlines usually are occupied by Asa Newell or Isaiah Brown, oohs and aahs from the crowd in the 1st half vs Breakdown at the lift and pure flight of Kam Wright, as he has put down a few eye-popping dunks#BattleattheBeach pic.twitter.com/ITV9CDIwxN

The guts and the fight were notable attributes of all the Breakdown teams as they went after it hard every time I came by their court, exemplifying that talent across both the 16’s and 17’s was Nelson at the 2-guard, several evaluators there were impressed with how hard he worked to get his shot and be a factor going to the basket, in a world where pushing the ball relentlessly at the cup is the premium he was both good at avoiding needless contact and getting the finish drawing the sly bump and going to the line.

Being guarded by an ever-rotating and larger crew of 1Family athletes, @TeamBreakdown 16U guard Jaylen Nelson is still getting his slash on, he can attack from either guard spot with a good handle out front or lots of creativity from the wing#BattleattheBeach pic.twitter.com/eVHZWqG3BS