Here’s the final group of four to come who created a whole bunch of buzz all weekend in the Sunshine State (in no particular order, GA guys have high schools in parentheses). 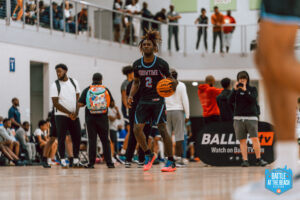 Watching Griffin play defense over the last 2+ years has left a resonance on me as an evaluator whether he was in town with always tough Norcross Heat or now with the loaded group down in Florida, the combination of foot speed and an ability to anticipate is what separates him at that end of the floor, his offensive game meanwhile has come light years from just a speedy driver to a more complete scoring PG.

Great to see Georgia's Naz Griffin doing what Naz does with @ShowtimeBoyzz 17U getting after it on D, few guys have been as entertaining to watch guard the ball with such intensity as Griffin over the last 2 years#BattleattheBeach pic.twitter.com/zGTaZcuZ4n 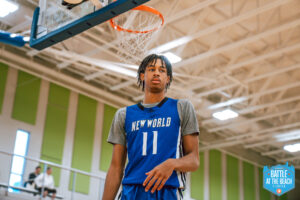 Playing up with the 17’s did nothing to quash or minimize the exciting skill package that lurks in the years to come for Rooths, at 6-8 with his kind of movement and electric lift off the deck that alone has recruiters salivating, further development of a perimeter game where all the pieces are there to unlock will like lead to the highest levels of D1 basketball, a name to commit to memory for sure.

The name Khani Rooths will certainly become even more prominent nationally in the very near future as the 2024 excels playing up with @NewWorldAAU 17U, at 6-8 with high major tangibles already, you salivate at 2 more years of HS & travel seasoning#BattleattheBeach pic.twitter.com/FCazVlgZpX

Lest we not confuse James’ appearance in this roundup with the fact that I had the pleasure of sitting next to and chatting with his father the former Miami  Hurricanes and NFL great Edgerrin Sr, his son showed plenty of what has made him highly coveted by the likes of Cincinnati, NC St, Providence and Georgia to name just a few as he is a power-packed athlete a the 1-spot who will get at goal with a push but can definitely hurt you from distance as well, superb court awareness is likely in the genes.

The Edgerrin James, Jr vs Gabe Cupps PG battle is both basketball and internet gold, two hyper-talented, high IQ D1 basketball talents who'll be on your TV really soon and have it all in the tank to unleash on you#BattleattheBeach@IndianaMBB pic.twitter.com/iUXcBfayXz 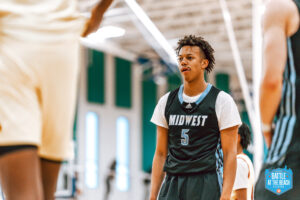 So much attention at least among chatterboxes along the side and end lines is about Hunter’s ballyhooed teammates and their many D1 offers, within all of that lies the solid play Hunter puts forth each time out as a perfect incarnation of the modern stretch-4, at 6-9 with a sweet touch to the arc and beyond he adds smart and focused hustle on the boards and on defense which stands out, deserves just as much attention as the other members of this stacked roster.

Attention gravitates to other star attractions with @MidwestBBClub 17U, but the more I see of Donovan Hunter the more I like all he can bring you, at 6-9 he fills the stretch-4 role to a T with the J, and dips down inside to give critical rebounding and hustle#BattleattheBeach pic.twitter.com/PAt7hPcaUr 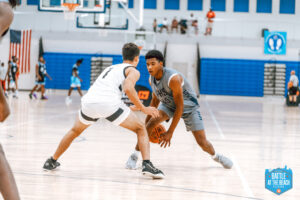 The description below of a football player in sneakers was all I could imagine watching the pure glide of Johnson as he found gaps and moved with such fluidity at both ends, as we see with so many FL prospects the hyper-athletic ability immediately draws you in for further analysis and there’s a ton there to like with Johnson’s upside at 6-3 with good length.

Gliding like a wide receiver with the change of direction of a cornerback, it almost looks like football out there for stellar athlete Jhamari Johnson of @_PHSAcademy 16U, in a basketball setting as his on court sense is honed it's a potentially scary package#BattleattheBeach pic.twitter.com/jfp4pZpWDe 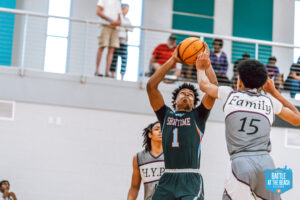 A first look at Mubiru this weekend and there was a ton to like from tip to buzzer, great frame for contact to go with a high-flying appeal that will surely translate well to the next level, he was all over the floor getting downhill and affecting things at 6-4 but appearing and playing a while lot bigger than that, St. John’s is the latest more prominent offer and that list is only going to expand in prominence-level.

A recent St John's offer added to his list fits in perfectly with what I just watched from Chris Mubiru of @ShowtimeBoyzz 17U, at 6-4 with a linebackers frame he can get a head of steam and play hard below or high above the rim to go with shooting from range#BattleattheBeach pic.twitter.com/3wyJd7xpk0 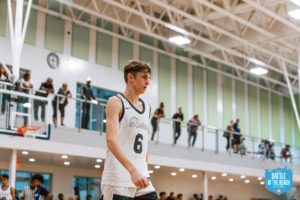 Caught Walters last fall at Hoop Exchange’s showcase at the Big House and he cut an obvious impression that day at 6-10, what’s fun about Walters in the summer setting is playing with a hyper-athletic group of Rebels he can still be noticeable doing the things he does well shooting it efficiently from distance and showing off advanced variety close to the basket, can be a rim protector for you and doesn’t mind getting dirty with other bigs.

Depth of options & such talent abound for @fl_Rebels 17U, 6-11 @SamWalters2023 is both easy to spot and easy to like and for more than just the size and length, whether spotting at the arc or catching in close there's a real natural acumen to go with the talent#BattleattheBeach pic.twitter.com/8Kio5haahH