MARIETTA, GA – Moving to the backcourt from last weekend’s Battleground Session 1 at Kell HS, where I was focused on the 5th and 6th-grade divisions (2029 and 2028).

We look here at some of the 6th-grade, 2028 guards who were hard to miss in a weekend where the young guard play was really sound and just as often explosive.

Too much about is game from a pure ability and upside perspective not too be actually a bit awed by Maurice, already built like a high school strong safety his full head of steam was virtually unstoppable without mauling him on the way in, out in space he cruised by defenders and had no equal in the speed with the ball department, the tantalizing raw skills combined with what he already has in the bank make this Cherokee-County product an absolute must-watch as he progresses toward high school. 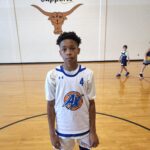 I know Brown from his work over in the Johns Creek feeder program and he had a strong season this winter and continued that over at Kell Saturday and Sunday, great control of the ball at top speed and when he uses the slick handle to break you down in a full-court push or on a quick drive at the basket it can be a blur, really composed as a floor leader and can go from distribution to dangerous scorer in a flash, tremendous upside. 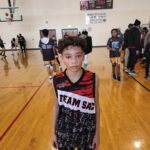 Tremendous energy and positional awareness as an on-ball defender place him quickly into the best defenders of the weekend ranks, was keen finding his post along the arc at the offensive end but as teams learned that he was smart and smooth getting things done in the mid-range, another high IQ youngster who really gets it at an early stage. 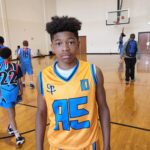 Big guard who when out-in space literally had kids clearing the way because of the physical nature of his downhill game, early in the weekend he was assertive inside as well but as the games wore on he began to show off the face-up game with the ball in his hands that has special potential, a full package offensively places him as one of the true stars of the weekend. 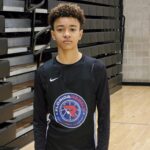 Astonishingly played HS-varsity ball down in Florida for St. John’s Country Day School this past year and was a standout performer, those advanced abilities were on display for the smooth lefty at Kell as well, his passing actually jumped out to me first as he played a lot of lead guard despite his size advantage over most others in the division and he had his head up and scanning the moment the ball touched his hands, great-looking stroke from distance, this is a PG prospect who you’ll be sure to be seeing pop into national rankings as his career progresses. 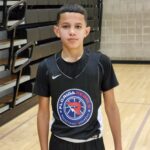 On a team with quality guards to spare there were intangible aspects of Garcia’s game that impressed, he matched Cooper as a passer with great vision and the want to make the extra pass, really controlled the ball well pushing pace but had plenty of flair to create as well, loved his work on D with active hands and an excellent eye for anticipation. 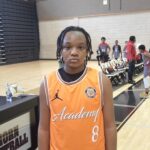 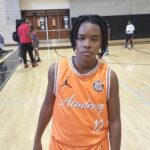 I group the two on a deep team of talented guys because of the interchangeable way they played and the similar skillsets, similar frames too both with the ability to really slash hard at the basket and bull through contact, each  just had a mind for scoring and didn’t let much get in the way of that pursuit, played hard-nosed D as well and were tough to deal with swapping between guard spots. 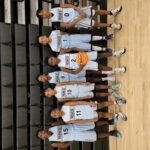 Once again so difficult to highlight just one guy from a Promise group that was my favorite unit to watch as a whole, Bell was at the head of their relentless defensive pressure and commanded the ball on the offensive end, in scoring mode he was quick and efficient and in passing mode he was precise and unselfish, this is a team full of Georgia go-getters we’ll hear more about down the line. 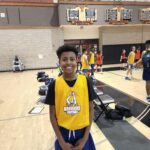 I liked the mind first of all as he is sort of was assassin-like out there picking his spots for the attack, spent time playing both guard spots and has plenty of handle to be a PG of the future but there’s stroke from distance to work with as well, plays with confidence but never seems too cocky for his own good, can take over in spurts even with lots of other quality options on his team, excellent defender as well. 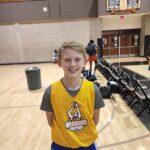 Pure 3-pt bomber wasn’t tied the line as 3 or 4 steps beyond the arc was not out of his range, worked really well off of Araujo and Maurice to get his looks on the push or the penetration of others, smart with the ball and composed under fire, another heady defender who understands how to guard tough without fouling.