Reikan Donaldson made a reputation for himself at the #OTRFallShowcase. He will suit up for the Wheeler Wildcats this winter. Photo cred – Ty Freeman/OTR

DULUTH, Ga., – Attention for high school athletes during the month of September is usually reserved for football players. However, the #OTRFallShowcase proved to be a prime time for players on the hardwood to garner media attention both locally and nationally. Class of 2018 prospects were able to compete against some of the best competition in the area while playing in front of Atlanta Tip-Off Club, McDonald’s All-American and Naismith Award Selector voters. Here are a few of the sophomores in the building who are poised for a big school season. 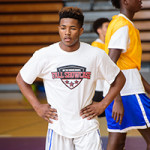 In a camp setting it could be easy to think that the players that get the most attention are the ones who shoot the most. Anderson set out to prove that does not have to be the case. He drew praise from his distributing ability. The 5-foot-11 lead guard continuously set up his teammates for easy shots and made his mark as one of the best point guards in the camp regardless of class. He seems to enjoy passing the ball, which will bring coach Geoffrey Pierce plenty of stability this year in Region 7-AAAAAA.

Standing at 6-3, Brown has ideal size to play in the back-court at high level. In addition to his great size, he possesses the ability to change directions quickly with the ball in his hands. His ability to create space stood out during camp games.

Of all the talent that was in the building, this 6-4 guard had one of the highest ceilings. The Sunshine State native displayed a great stroke from beyond the arc while also being great in transition. We believe that Burse is just scratching the surface of his potential. His blend of size, skill and athleticism is unique and exciting. 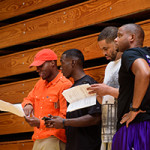 The left-handed guard got on the radar of evaluators with his terrific play-making ability. He was quick to get downhill to burst past defenders. Given his athleticism and the high school program that he is a part of, Donaldson will be one to mark as a Must Track Prospect in years to come.

Thomas is a nice sized combo-guard standing at 6-3.  He showed his specialty to get downhill to finish at the rim. The sophomore was very good at finishing on the move, which is only accentuated by his size and athleticism. We will keep a close eye on his development over the next few years. 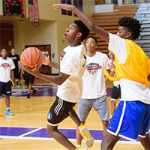 White is a point guard that gained valuable experience last year while playing big minutes for coach Jesse McMillan’s Blue Devils. He showed his poise and play-making ability that earned him big minutes in the House of Blue deep into the GHSA Playoffs. He is terrific at getting into the lane and slithering in between defenders. We expect to see White progress as a prospect this year.