Duluth, Ga. – The On the Radar Hoops Fall Showcase was a good chance for several underclassmen to show their abilities in a skill and competition setting. Although the camp was headlined by several seniors, there were underclassmen who proved that we will be talking about them for years to come.

Looking for a post player that hustles from start to finish? South Atlanta post player Tyler Thornton is your guy. Thornton is a good athlete with long arms and legs, good speed and leaping ability and a frame that has started to fill out with long and lean muscle tone. He didn’t get many touches on the low post , but used his mobility to make plays around both rims, running the court and going to the offensive glass for dunks. 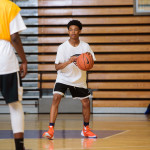 This 5-foot-9 guard is a sniper from behind the arc, he is capable of reeling off multiple three pointers at any point. He is cat quick with a tight handle as he pushes the ball in transition at high speeds. He has a laundry list of dribble moves and he can beat pressure at will. Cooks can penetrate and kick or drive draw and quick to find the open man on a regular basis.

Recent Texas transplant, Stone has great size at 6-foot-8 and weighting in at 250 pounds. Stone has a nice offensive skill set and does a good job of craving out space on the low block. He is a player to keep an eye on in the class of 2017

Each year Green continues to improve his game and take his skill level to the next level. Green is a long armed athlete that is very active. He attacks the rim in transition and can score over or around defenders with athletic scoring plays.

North Florida recently offered Johnson after a strong showing this summer. This 6-foot guard caught our staff’s attention during the April evaluation period, while playing up on a 17U travel team. Johnson is a smooth lead guard that does a good job of penetrating the defense, scoring with either the floater or pull up jumper. Johnson will be a name to keep an eye on over the coming years. 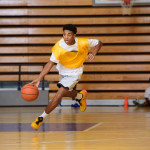 Tucker is a true shooting guard with deep range who especially likes to shoot three’s from either corner. He was equally effective getting to the paint, once he gets you off balance he is explosive enough to get into the paint for a finish or use a nice mid-range pull-up.

This 5-foot-8 lead guard allows the time to come to him. He moves well without the ball finding holes in the defense where he proved that he could knock down the open shot.