Available forward Bryce Brown of Archer (GA) caught the attention of many programs that was in attendance at the Super 64 Camp. Photo Cred – Ty Freeman

Atlanta, Ga – The Super 64 Camp was a good chance for underclassmen to show their abilities in a skill and competition setting. Although the camp was headlined by several seniors, here are 5 players that our Samad Hines noted as players to keep an eye on. 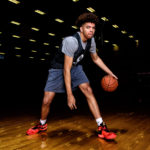 Bryce Brown was outstanding at this year’s On the Radar Hoops Super 64 camp. The senior forward was able to show all his skills on the floor once the 5 on 5 games got under way. He can be played at the stretch four position if you decide to go small. He can be a real threat from the perimeter as he is able to knock down the three ball. Brown was also able to post up and show us how efficient he can be in the low post. 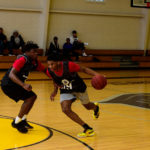 Remember the name Kadarius Johnson, if you have not heard already. The class of 2020 is already loaded with fabulous talent across the country and I believe now we can add the 6’1 guard Johnson on that list. The sophomore attended the Super 64 camp and continued to show out like he has been all season. He is a very dynamic guard who can certainly bring the energy to the team. He locks in defensively and is able to score in transition and finish at the rim. Johnson also gave us a peak at his point guard skills as he was able to find and create plays for his teammates. This kid has major upside and will be a name to look out for in the near future. 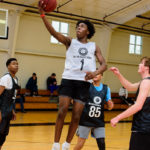 Jordan made his presence known this past Sunday at the Super 64 Camp. He is without question the definition of an athlete. Jordan plays both basketball and football and has a few offers on the football side of things according to his dad. On both ends of the floor Jordan was able to show us his basketball attributes. He is a very active guard and has great size for the two-guard position sitting at 6’2. He was able to get to wherever he wanted inside on offense when making his way to the basket. His real strengths come from his defense. His awareness was very impressive all-day long. Rebounding, blocking shots, and collecting steals was what he did best. 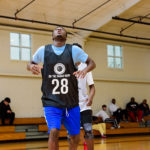 If you want a guard who can play big and not afraid of the physical play then Ocean Scott is your guy. Scott was one of the top prospect I witnessed that seemed tremendously tireless. He is the definition of a hustle guy when he is on the floor. He was able to score inside the paint with the big boys and was not afraid to get physical down low on defense.

Kendall Peabody, I can say was one of the smoothest guards at the Super 64. Peabody has a major upside to his game. He is an 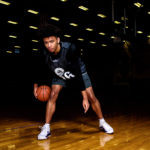 athletic wing and/or guard that was able to knock down his shots from behind the arc. He was also able to finish and transition and has a decent bounce in his game. Peabody should be a name to look out for on his Duluth squad coming up next season.