LAWRENCEVILLE, Ga., – There was plenty of quality of basketball being played in the metro-Atlanta after Thanksgiving. The Thanksgiving Showcase presented by On the Radar Hoops provided an elite stage of exposure for high school teams in the state of Georgia and beyond. Here is a look back at the standout performances from last weekend.

Use the #OTRThanksgivingShowcase hashtag to track all tweets on social media

Names below that are underlined have evaluations written. Click on the links for evals, videos and more.

Bethea emerged as a bona fide playmaker last weekend. He contributed significant minutes last year as a freshman, however this year he has the keys to coach Russ Triaga’s offense. He is making good use of his time at the point guard position. He plays efficiently making plays and distributing to others. He finished the morning game with 20 points in a win over Archer High School 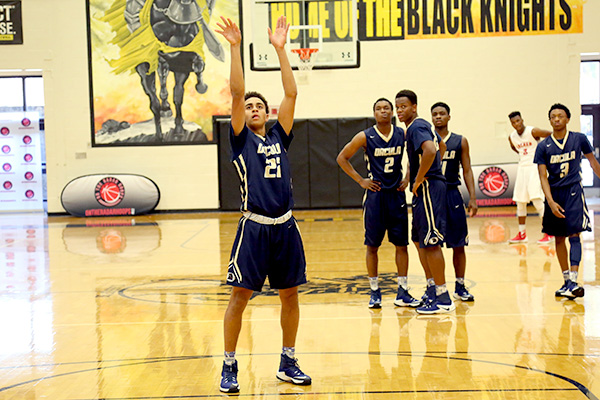 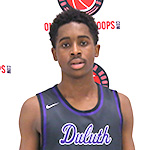 On a team with many talented guards, sometimes it just a matter of which player will get hot on a given night. In a match-up versus Central Gwinnett coach Cabral Huff saw Flagler catch fire en route to a 28 point effort. He got his points in a variety of ways including hitting jumpers, getting to the rim and knocking down free throws. Flagler showed play making ability in transition and was key in breaking down Central Gwinnett’s pressure on Saturday afternoon. Look for the junior to be a key part of the Wildcats game plans they try to make the state tournament this season. 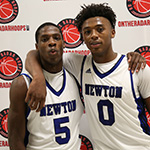 Coach Rick Rasmussen quite possibly has the state’s best guard trio with class of 2019 Ashton Hagans and class of 2017 JD Notae (Jacksonville signee) and Isaiah Miller. Hagans has been the engine that has powered the Rams to a 3-0 record coming into this game. However, in a matchup with Berkmar Newton County had to find another source of scoring when Hagans went to the bench midway through the third quarter with four fouls. At the time the game was gridlocked with neither team being able to pull away. By the time Hagans returned a few minutes into the fourth quarter, Newton found themselves up nearly double digits. Miller is a big reason why the Rams were able to pull away. The hyper-athletic guard manufactured buckets in the half court and also put on an acrobatic display with several high flying dunks. He finished with 22 points while helping his team earn the respect as one of the top teams in Class AAAAAAA this season. 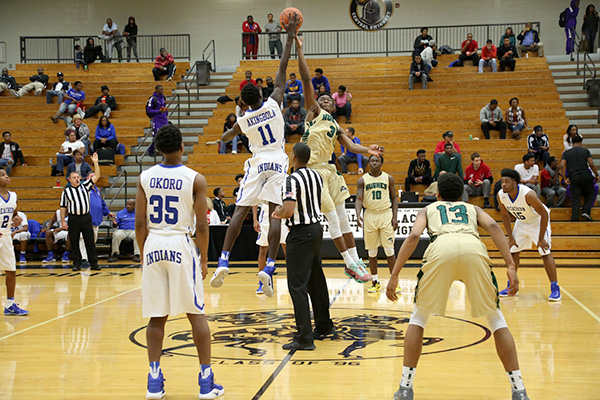 McEachern and Langston Hughes butted heads in one of the best games of the night at the #OTRThanksgivingShowcase. Photo cred – Larry Rhinehart 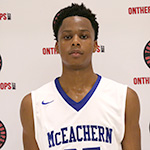 Okoro is taking steps forward as one of the best scorers in the state, perhaps even the nation, after a strong start this high school season.  A well built, athletic wing built a reputation as a slasher who can score in the lane while playing with A.O.T. on the summer circuit. What Okoro proved on Saturday evening is that he can jumpers with consistency too. His 3-point stroke is smooth while he can also keep defenders off balance with the pull-up jumper. His 31 points led all scorers from the Showcase and helped McEarchern to a 70-61 win over Langston Hughes. 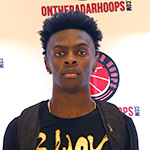 It is no secret that the key to winning basketball games is playing tough defense and having kids that can make shots. Coach Daniel Bowles got that from his senior guards at the Thanksgiving Showcase. Parham led the way with 18 points, but he gave plenty of energy on the defensive end as well too. The output that Parham gave combined with the leadership that Trae Higginbotham provided was enough for Brookwood to run away with a 20 point win over West Charlotte High School (NC). 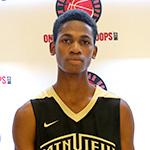 Rodgers is emerging as one of the better guards in Gwinnett County after consistent performances with Mountain View High School. While guard play dominated the day, Rodgers is different because of his size. He plays on the wing, but he can get buckets among the trees as well. It was his jump shooting ability that provided most of the 26 points in a match-up versus Douglas County. He mixed 3-pointers with pull-up jumpers proving that he should give many more performances likes this for coach BJ Roy’s squad this season. 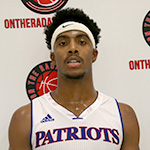 Heritage boasts of a very good guard trio much like Newton County. Florida Atlantic signee Bryon Abrams is joined by uncommitted class of 2017 guards Jordan Thomas and Isaiah Banks. Thomas paced the Patriots in a win over Peachtree Ridge with 22 points. He did a lot of damage from beyond the arc and in transition with finishes. His defensive accumen was not lost on evaluators as well.  The 6-2 guard was off the grid in terms of college recruiting until he picked up an offer from Georgia College & State College after his play this weekend. Expect interest to mount up for Thomas with more performances like this one this season.

Jordan Thomas (@jt4__) had an all around game for @Patriots_hoops. From scoring 22 to great defensive possessions. pic.twitter.com/fULuzRGtul