Powder Springs, GA– Teamwork was a common theme this weekend. While there was undoubtedly an abundance of talented individual players on hand, the dominant duo and trio teammate combinations were on full display. Here’s a look at a couple of the top one-two punches and big three combos at On the Radar’s Atlanta Classic. 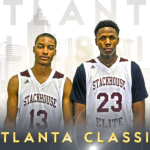 At 6-foot-9, Amari Kelley covers a lot of space on the offensive and defensive interiors. He is a great offensive rebounder and an above average shot blocker. The 240-pound big man consistently hangs around the double-double stat line in points and rebounds. A perfect complement to Kelly is teammate Tyrone Nesby. The 6-foot-5 wing can absolutely fill it up from downtown. At one point this weekend, Nesby connected on ten straight three pointers over a two-game span before missing. In addition to his silky-smooth jumper, the versatile combo guard is a good defender and offensive facilitator. With Kelley patrolling the paint and Nesby dominating the perimeter, Stackhouse Elite possesses one of the top inside-outside combos on the travel circuit.

I would be remiss if I did not mention Stackhouse Elite’s up and coming duo of Imajae Dodd and Jamir Chaplin. Like the dominance of Kelley and Nesby on the seventeen and under level, these youngsters wreaked havoc in the sixteen and under division. At 6-foot-7, 200-pounds, Dodd has great athleticism, footwork, and touch around the basket. He currently holds offers from Old Dominion, Tulane, and UNC-Charlotte to name a few. Chaplin, a prototypical swingman, can score the ball at a high clip and guard multiple positions defensively. Middle Tennessee State and Tulane have both offered the 6-foot-4 sophomore.

Middle Georgia hoopsters continue to prove they’re no fluke… taking a page out of the notebook of the shoe company teams, Team Georgia Magic assembled some of the best talent from the Middle Georgia area this weekend and headed north for On the Radar’s Atlanta Classic Tourney. Cameron Holden, Nelson Phillips, and Tye Fagan are all multi-talented prospects from the mid-state that pose matchup problems for just about any team they face. Holden, 6-foot-5, is a versatile freak of nature. Using his entire offensive repertoire, he keeps bigger defenders off balance out on the perimeter and has his way in the mid-post area with smaller opponents. Phillips, a skilled offensive beast, fits the mold of a Paul George type of player. The 6-foot-5 wing is masterful at creating for himself as well as setting teammates up for easy buckets. He shakes off the opposition easily with his superior ball handling skills, knocks down the 3-ball at a high rate, and will posterize defenders if he gets a step ahead. Fagan, a smooth operator, has a nice pace to his game that enables him dissect defenses effortlessly. The south-paw guard scores at all three levels and is cool, calm, and collected in pressure moments. In front of a full house, Fagan calmly penetrated the lane sinking a go-ahead layup as time expired to upset a loaded Stackhouse Elite squad. The talented trio led Team Georgia to an undefeated 5-0 tourney finish. In addition, all three players have mid to high major offers and interest. 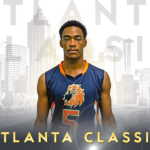 The one-two punch of Da’Marcus Johnson (pictured) and Jaylen Rasheed piqued the interest of several evaluators. Johnson, a sophomore from Tri-Cities (GA) High is as good as any point guard I have seen all summer. Although he doesn’t have the hype surrounding him as some of his counterparts, the 6-foot, 160-pound lefty showed that he is more than capable of holding his own against elite competition. Right now, he holds offers from North Florida and Georgia Southern, but expect that list to grow as time moves forward. Whether it was a mid-range pullup or deep 3-pointer, Rasheed’s jumper was seemingly automatic the entire tournament. Capitalizing off Johnson’s drive and kick passes, defenses were forced to pick their poison when matching up against South Fulton. This dynamic duo was easily one of the top 3 backcourt combos on hand this weekend. 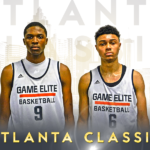 Isaac Martin and Malachi Rhodes are both rugged players that thrive in a physical atmosphere. Martin has multi-facets to his game. The bruising 6-foot-5 guard has the capacity to step out and play with finesse out on the perimeter, but he is at his best when opponents up the ante on defense. Martin effectively played through contact and capitalized on continuation buckets all weekend. On the other hand, Rhodes is a flat-out junk yard dog that is somewhat of an enforcer on the interior. The feisty 6-foot-7 forward is long and athletic and plays well above the rim. He continually took opponents out of their comfort zones and proceeded to take games over in the process. Martin and Rhodes are both rising prospects to watch for in Georgia’s 2019 class.