CJ Harper shined at the On the Radar Hoops Invitational.

Atlanta, GA- On the Radar’s Atlanta Invitational is one of the premier elementary and middle grades travel tournaments in the southern region. This weekend it featured some of the best young talent from states such as Georgia, Florida, New Orleans, South Carolina, and Tennessee to name a few. Here are a couple of impressive young ballers that are ready to step into the spotlight and fill the void left behind by outgoing seniors. 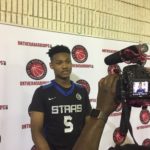 Harris is a big physical combo guard that did a little bit of everything this weekend. The rising freshman from Macon, Georgia was arguably the best young prospect at the Atlanta Invitational. He wowed onlookers with his athleticism, physicality, and overall feel for the game. Harris was noticeably beyond his years as he showed the ability to remain calm and hit clutch shots in pressure moments. Whether it was assisting, defending, rebounding, or scoring, the 6-foot-3 future phenom dominated all weekend. Simply put, Jaden Harris is the total package. 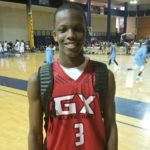 Durr is another multi-talented big guard in Georgia’s 2021 class. He has nice size and is ultra-competitive when he steps onto the court. Offensively, he is virtually unstoppable when going right. He gets to the basket at a high clip and finishes well through contact. In addition, he demonstrated that he could shut down opponents and get defensive stops when it’s winning time. Overall, Durr looked to be the most naturally gifted offensive player on hand this weekend, but will need to work on going left and improving on his 3-ball moving forward. 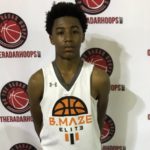 Edwards and Curry carried most of the load for B. Maze Elite this weekend. They complement one another well and are seemingly the next big names coming out of the volunteer state. Edwards kept defenders on their heels all weekend by pushing the ball at every opportunity. Further, the intelligent floor general made smart decisions and settled the team down when things started to unravel. While Edwards took care of business on the perimeter, Curry owned the interior on both ends of the floor. The rangy forward used his sneaky athleticism to clear the boards and swat shots. These two promising prospects are ones to monitor closely on moving forward.

Carlyle was one of the more impressive younger point guards in attendance. He made a couple of jaw-dropping plays that were simply amazing for a player at this grade level. This kid understands the game and is the ultimate competitor, leader, and winner. Carlyle (14P 4A) absolutely took over down the stretch in the twelve and under championship game versus Dream Chasers Academy. He scored on every offensive possession during the final two minutes of the game en route to lifting his J3 squad to the Pac 12 Bracket Championship.

At the time being, Hawkins is a throwback type of player that has a little junk yard dog in him. He is not the most gifted offensive player, but he has enough skills to make opponents respect his game. The bruising swingman does all the small things that do not show up in the stat book and is a clear vocal leader on the court. Overall, we were impressed with his high motor and old school style of play.

Smith is a straight to the point player that lets his play do the talking. The smooth combo guard picked his spots all weekend scoring the basketball. He displayed great ball skills and a developing jumpshot. Great guard play was a common theme at the Atlanta Invitational and Smith was undoubtedly a part of that mix. 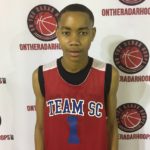 The last name McGowen may ring a bell to many in South Carolina. Bryce McGowen is the younger brother of 2018 standout Trey McGowen. Like Trey, Bryce is a talented wing player that can effectively play every perimeter position. The lanky scoring guard has a multi-faceted offensive skillset that allows him to shred defenses and will more than likely pave the way for him to see varsity minutes as an incoming freshman.

Harper is an impressive lefty guard from the ten and under division that has a high basketball-IQ. He dribbles with his head on a swivel out in transition looking to set teammates up for easy buckets. However, most noticeable was his ability to run the team. At this age kids are just playing, but it was clear that Harper has been coached up and understands the game.