Atlanta, Ga – This past weekend, our staff checked in at the Buford Showcase in Buford, Georgia to check out some of the top teams in Georgia. As we finish up 2018, teams are getting in a groove and trying to play their best basketball. There were a couple of games that came down to the wire.  You can see the sense of urgency in all teams trying to execute and perform well going into the new year. There were a few big-time players who came up big for their teams this weekend. Let’s check out some of the top prospects from the showing.

Smith is an athletic wing that will fill up the stat sheet.  He is a great spot up shooter that uses his size to shoot over defenders. He also was locked in on the defensive end playing in the passing lanes. This California signee has been consistent all year for the Wildcats, he finished up with 22 points.

Great start to the season for Charles Smith IV – today’s #BufordShowcase has been no different. Rattling the rim, slashing & splashing left and right. Threes have become layups.

Williams is a athletic forward who can stop on a dime and pull up as well as put you on a poster. He can knock down shots all over the court and he is a good driver as well. He finished up with 24 points against a talented Norcross team.

Boston led the way for Norcross with 22 Points. He handled pressure well as he was guarded closely for a majority of the game. Boston does a good job of running the floor on the break, coming off screens and spacing to the open area on dribble penetration where he is shot ready on the catch. 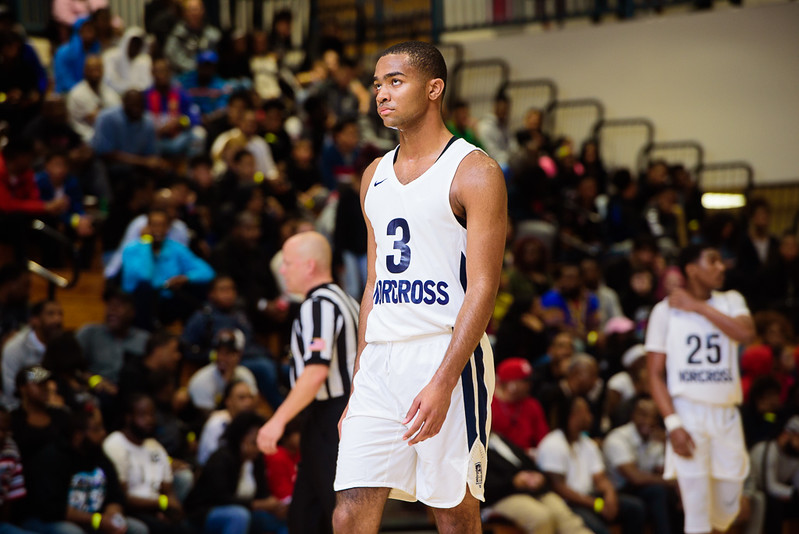 This is a combo guard with good size and good pace. He displays good IQ and patience as he made good decisions all game. Sturdivant was able to attack the paint finishing around the rim while hitting a couple of three pointers. He completes on both ends and has the skill to be a complete guard.

Wright is the Go-To guy this year for Aquinas. He is a quick, versatile scorer who scored well from all three levels. Wright was able to get to the line and covert due to the defense having to respect his 3pt shooting (8 3PM). Finished up with 38 points.

20’ @zy_wright is the Go-To guy got Aquinas this year! Quick, Versatile Scorer who scored well from all 3 levels! Was able to get to the line and covert due to the defense having to respect his 3pt shooting (8 3PM). Finished up with 38 points! pic.twitter.com/tUdmJOeR25

Watson is a guard with elite size and athleticism. He was probably the most athletic guard in the showcase this weekend. He is so quick off the floor that he often jumps twice before most get up once. He gets most his points off of dunks in transition or attacking the rim off the dribble.

Sheppard is one of the elite shooters in the state. He has a crisp shot with a high release and he gets it off quick.  He has a high basketball IQ and knows how to move without the ball to get open. Sheppard connected on (6) three pointers over the weekend.