Brown’s play on the court over shadowed his off court trouble that he had recently. It will be important for the 7-foot-1 big man to keep his focus on the positive things in his life. The center gave his verbal commitment to St. John’s a few weeks after showing out at the OTR Super 6 Showcase. His dominating performance versus Louisville commit Malik Williams set the tone for the rest of July. He finished with 24 points, 14 rebounds and five blocked shots in that game.

Felton is a UNC commit and has been for a few years now. The nephew of former Tar Heel and current Dallas Mavericks Raymond Felton, Jalek is building his own reputation as a prep star. We have evaluated the South Carolina native a number of times at USA Basketball Mini-Camps over the years. His athleticism and play-making skills have always made him a standout performer. As he heads into his senior year Mullins High School, the 5-star prospect earned a spot on the #NaismithWatch List.

Perry’s July solidified him as a consensus top 100 player nationally. The 6-2 guard is in the mold of UConn signee, Alterique Gilbert, in that he is a scoring guard who can set the table for teammates as well. He is set to lead a reloaded Wheeler High School team this fall. With a host of offers from across the country, Perry selected Louisville as his destination today. Expect coach Pitino to develop Perry well in his up-tempo offense. 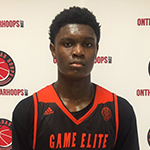 This summer was a big one for the 6-6 forward. Williamson earned MVP honors at the NBPA Top 100 Camp in June and then proceeded to tear up the July circuit with a number of dominant performances. His 30 point outburst versus the Texas Boys Athletic Club at the OTR Super 6 solidified for our evaluators everything that others had been saying. Williamson earned a 5-star rating over the summer and picked up dozens of offers in the process.

Uyaelunmo is ranked No. 73 in our BCS Elite 100 rankings for the class of 2017 for a reason. He is an elite shot blocker and will alter shots even when he does not get a touch on the ball. His rebounding is also a strong point of his game since he has such a high motor to track missed shots in and outside of his area. He picked up an offer from UConn shortly after competing at the OTR Super 6 with the Florida Vipers.