Atlanta, Ga – The 2018 spring travel ball period was action packed and filled with many storylines. There were expected big time performances by the usual suspects, surprising consistency from several late bloomers, and story starting moments from a couple young pups. Below, Hypesouth Media reveals who is “up next” in Georgia.

Already holding a Tennessee offer, Anselem pulled in five more Division-I offers during the spring from Auburn, Clemson, Florida, Kansas State, and Ole Miss. The 6-foot-9 post is a force on the offensive and defensive interiors. He rarely misses the mark when he gets the ball on the low block and is one of the top shot blockers in Georgia regardless of class. Anselem looks to be ahead of the curve development wise, so don’t be surprised to see his name near the top of the 2021 national rankings once national scouting services update their databases. 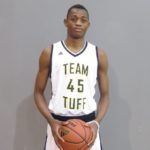 Mutombo had a coming out party in April solidifying himself as one of the top young big-men in the peach state. With Georgia Tech and New Mexico offers already in hand, he convinced Auburn, Florida, Mississippi State, and Xavier to extend offers during the spring travel period. The 6-foot-9 rising sophomore runs and jumps like a gazelle, but is still a bit raw at this point. He showed flashes of being able to play with his back to the basket and dunks everything around the rim. Defensively, his shot blocking ability in reminiscent of another Mutombo who just so happens to be a 4-time NBA Defensive Player of the Year. This kid’s upside is off the charts and we fully expect him to make a splash in the 2021 national rankings as well.

Abidde is not as far along in progression as his aforementioned counterparts, but the 6-foot-7 strong-forward is no slouch. He had some impressive moments this spring running with the Atlanta Celtics and is seemingly ready to take the next step in his development. Along with his above average interior defense, he demonstrated the ability to create off the bounce and work freely from the mid-post area. Right now, he’s garnering interest from several low to mid-major programs.

Westover (GA) forward Isaac Abidde @lokeyezzy has excellent length, he does a good job altering/blocking shots around the basket @freshucamp

Moore is an active player that can play the off-guard and small forward positions. At the time being, his midrange pull-up and defensive intensity are his strong suits. The 6-foot-4 wing reeled in an offer from Rutgers following April’s live session and is rumored to be transferring over to Holy Innocents from Chamblee Charter. If so, he’ll be joining Garrison Powell, another talented 2021 prospect already in the fold at HIES. Like Moore, Powell had a monster month of April prompting Ole Miss and Mississippi State to pull the trigger with offers. Look for these two to become household names in Georgia moving forward. 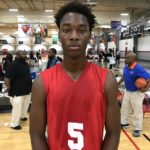 Wright is somewhat of a mystery prospect around the state and we’ve fielded several calls from evaluators, coaches, and casual fans simply wanting to know… who is this kid? Well, Wright is a super talented kid that has been hidden playing on lower circuits in the mid-state area for quite some time, but surfaced on higher circuits in a major way this spring. He displayed his superior talent to a broader audience and we (Hypesouth) were not surprised by his play. However, how far he goes will ultimately be up to him. Simply put, the 6-foot-7 budding star has everything in his bag and it’s only a matter of time before coaches come calling. Stash this name in your notepads because I can assure you it will be useful later. Stock up!

Reeves, Jr. got hot at the right time this spring and coaches took notice. The 6-foot-2 shooting guard sprouted up four inches within a month’s time. Couple that with his hot shooting over a three week stretch and it is easy to see why coaches started to sniff around. Florida got out in front throwing its name into the hat with an offer following April’s evaluation period. Louisville and Xavier made contact as well. With a couple inches left in him to grow, Reeves, Jr. might become an even more intriguing prospect if he can continue to expand his game.

Harris is one of the most athletic players in the 2021 class and we expect him to burst onto the national radar real soon. If the 6-foot-3 combo guard can squeeze out a couple more inches and develop a consistent deep ball, watch out! In April and May, he picked his spots facilitating and scoring on a loaded Georgia Stars 2021-EYBL squad. Georgia State, Georgia Tech, and Ole Miss have made things official with offers and we fully expect this list to grow come July.

Daniels quietly had a very productive spring session and is a name that you need to get familiar with. This kid is a smooth operator from the lead guard position. The 6-foot-1 floor general can give it to you however you want it. He can score it effortlessly, facilitate, and control pace. As time moves forward and 2021 draws near, college coaches will be ringing this kid’s phone off the hook to come run the show for their respective programs.