Kevon Eskridge showed that he can score in a variety of ways at the On the Radar Hoops All-American Camp. Photo Cred: Kemi Griffin

DULUTH, Ga., – Finding a way to play top talent while also getting quality exposure is a tough proposition for younger players. However, the Middle School All-American Camp provided that exact formula on Saturday afternoon at Duluth High School. Here is a look at some of the stars of tomorrow who got the foot in the door in front of OTRHoopsReport.com evaluators.

Kevon Eskridge of Tucker, Georgia is a crafty lead guard that has excellent court vision. Eskridge was at his best in transition where he could either finish with a deep jumper or find open teammates for the easy score. 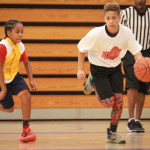 Jayden Cox-Young of Creekland MS (GA) excels on both ends of the floor. Cox-Young was effective creating separation and finishing around the basket. Good defender who did a good job of jumping passing lanes and converting on the offensive end.

Another guard that stood out was Madison Durr of Atlanta, Georgia. He is a long athlete with some bounce that plays with a nice a pace. He sprints the wing in transition and is a threat to get to the rim or knock down the spot up three. 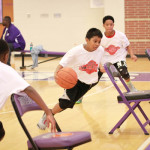 Point guard Shomik Shajahan of Chapel Hill MS (GA), is a shifty lead guard that did a good job of pushing the ball in transition where he was able to find open teammates or knock down the pull up jumper.

Sam Perry of Atlanta, Georgia, has excellent size and skill for a young guard. He has the ability to play multiple positions on the perimeter. Perry has the capability to attack the basket going either left or right and effectively knock down the mid-range jumper. 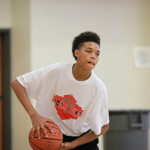 Brandon Boston of Holy Spirit Prep (Ga), showed the ability to handle and create his own shot off the bounce or knock down the open jumper. Boston was one of the better shooters that our staff saw at camp. He is equally effective shooting off the catch as he is pulling up in transition. He can come off a pin-down screen, gets his feet set, and gets great lift on his shot.

South Carolina native Traye Carson is a pure point guard who excels at pushing the ball down the court, penetrating and hitting open teammates with on-target passes. He is an accurate 3-point shooter, but usually looks to pass first. He has great acceleration, including an overdrive gear, which he utilizes to explode to the hoop. 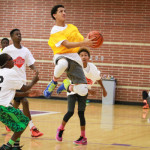 Kellen Walker of Jordan MS (GA), has range that extends to the 3-point line and will connect on jumpers from the perimeter that result from dribble drives and kicking out to him on the wing, as long as he has his feet set. Walker does a solid job of playing defense on the wing where he forces turnovers from jumping passing lanes.

Another guard that stood out was Jaquez Holt of Arnold Magnet Academy (Ga), constantly plays at a high level. He is back at attacking the basket where he can finish through contact. Defensively, he has the ability to defend multiple positions.

Zachery Payton – Promising young guard who has the ability to create for himself and others off the dribble. Steady ball handler who looked good during the skill stations and game play.

Isaac Abidde – Complete player with a good grasp of fundamentals, handles the ball well and uses screens effectively. Hunt has a good shooting touch and can finish in the paint

Jalen Mills – One of the youngest players in camp, Hyland is a blur with the ball and was able to penetrate the defense throughout the day dishing out assists.

Ovie Patani – Long and athletic wing with plenty of upside, he is at his best when he is attacking the basket. Lane was one of the better finishes in the paint.

Trey Williamson – Skilled player who exhibited a well-rounded game. Williamson really seems to understand the guard position and making those around him better.

Cairi Hines – Despite being one of the camp’s youngest players, Hines stepped up to the occasion with excellent all-around guard play.

Julian Mackery – Smart guard with a good all-around skill set. Mackery showed the ability to attack the lane and find teammates cutting to the basket for easy buckets.

Devon Wiggins – Athletic and versatile guard with good size. He is capable of running the point or playing the shooting guard spot. Got to the basket and finished consistently throughout the day.

Rodney James – Speedy Point Guard who had a good showing throughout the day. Uses dribble moves to freeze opponent, combined with the quickness to blow past defender.

Jacorey Adams – Good looking guard who had a solid performance in both skill stations and 5 on 5 games. Adams is a scoring threat from the outside and off penetration.

Xavier Brown – Scoring point guard with good quickness; has good court vision and passing ability. Can score the ball in the lane, mid-range, and from beyond the arc.

DaQuan Hawkins – He impressed with his quickness, ability to get to the rim and convert drives. Hawkins plays with a lot of energy. Above average on ball defender; plays passing lanes well.

Brian Baylor – Has good all-around game and is very fundamentally sound. He finds open man for scoring opportunities and knocked down jumpers.

Tim Clarke – Heady and skilled playmaker; that showed range out to the three point line. He has a good handle and is very poised on the floor.