Hyattsville, MD.,-The National Hoops Festival has established itself as one of the nation’s most prestigious showcases, Which displayed some of the top programs around the country. These matchups allowed for a terrific showdown over the weekend. The line-up included nationally ranked players such as Anthony Edwards, Hunter Dickerson, Jaden Springer. and Jeremy Roach. Here is a look at a few individuals who took advantage of the exposure. 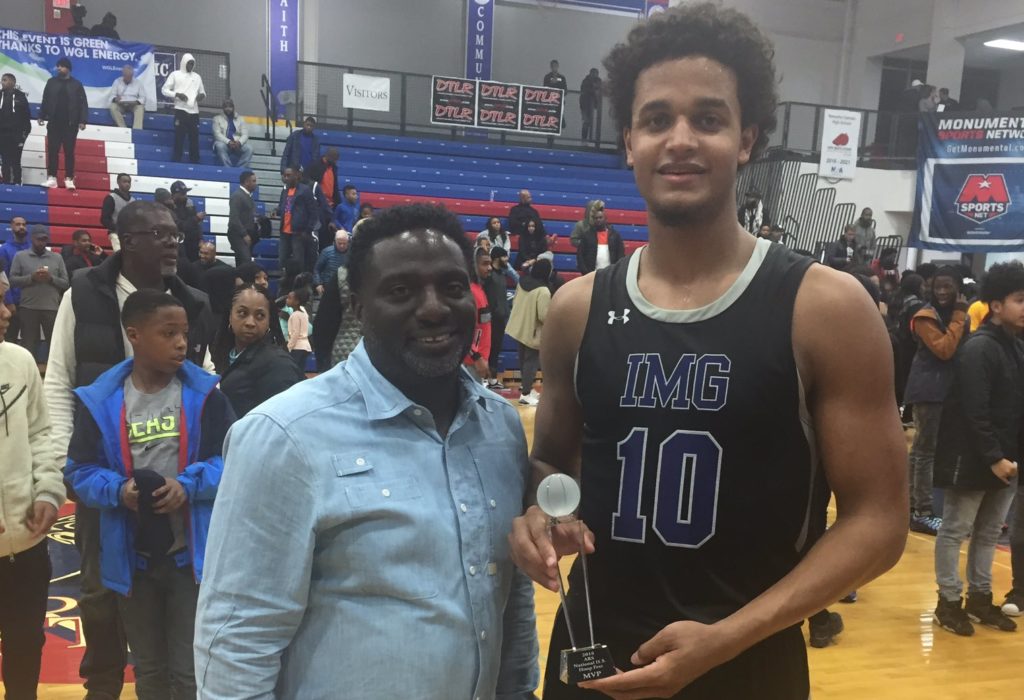 6’9 Jeremiah Robinson-Earl doesn’t get enough press and depending on what list you’re looking at he might be ranked to low.  Over the weekend he looked as if he would be immediately inserted into Jay Wright’s line up next season.  Transferring to IMG his senior year the forward looks as if he’s been eating weights and his motor continued to stay at a high level all weekend long.  Robinson-Earl might be the best offensive rebounder around as he fought for position and wound up with multiple tip ins in both of the games he played.  In two wins the senior showed a good mix of both his inside and out game, with the thing being about him on the perimeter was that he didn’t float, but rather picked his spots in the short corner and free throw line extended areas to operate and finish with either hand at the rim.

With both Virginia Tech signee Anthony Harris and Class of 2020 5 star Jeremy Roach sidelined with ACL injuries there was a big question as to who would step up in a big matchup against nationally ranked Montverde Academy.  The answer was 5’10 freshman point guard Dug McDaniel.  McDaniel entered the game and was an immediate crowd favorite as he dropped a couple of defenders with his nifty handle and pinpoint passing.  The freshman looked as if he had been here before.  He didn’t get rattled and ran the team to the tune of 13 points and 11 assists.  McDaniel made the most out of his opportunity, schools need to get familiar with him now.

Quiet On The Recruiting Trail

Always interesting to see why certain players aren’t getting as much attention as they should.  Coming into this weekend it was Montverde Academy senior Harlond Beverly.  The athletic wing was more than solid in both of his games.  Whenever his team needed a bucket Beverly delivered, and he over delivered in Saturday’s comeback win over Paul VI.  With Montverde trailing at halftime Beverly started the third quarter with three straight scores on his way to a perfect 9 for 9 from the floor.  He plays with pace and his an excellent on ball defender who got all of his points within the flow of the offense.

Edwards Backs Up The Noise Again

Anthony Edwards took his scoring barrage to the DC area and score he did over the weekend with a 41 point 14 rebound outburst on Friday night followed by 27 points in a losing effort on Saturday.  When the 6’5 wing gets into a groove he’s just to tough to stop.  The ultimate offensive weapon, Edwards had the range from deep working to go along with punishing drives.  Much talk has been about his ability to score, but the Georgia native is a very underrated passer and an unselfish teammate.  Over the last few outings that we have laid eyes on him his defense has taken a couple of steps up.  Edwards has a tendency to fall asleep as an on-ball defender, but lately he’s been good at rotating and being disruptive in the passing lanes.

This was well worth having to be at the top of the standing room only crowd as the host school Dematha took on Florida power IMG.  Both Springer and Moore are a pair of chiseled 6’4 guards that don’t mind the bump and grind.  Neither one backed down from each other the entire game, and both had success doing what they do best.  When it comes to Moore the smooth operating wing that just seems to knock down shots and come up big defensively by using the intangibles he seemed to have frustrated Springer in the first half.  As the second half began Springer came out of his shell to find his way into the lane for tough pull up jumpers and bruising drives.  This was a throwback matchup in that each player guarding the other the entire game with a little jawing here and there.  IMG got the win as Springer finished with 14 points 7 rebounds 3 assists.  On the other side Moore ended with 16 points 5 rebounds.