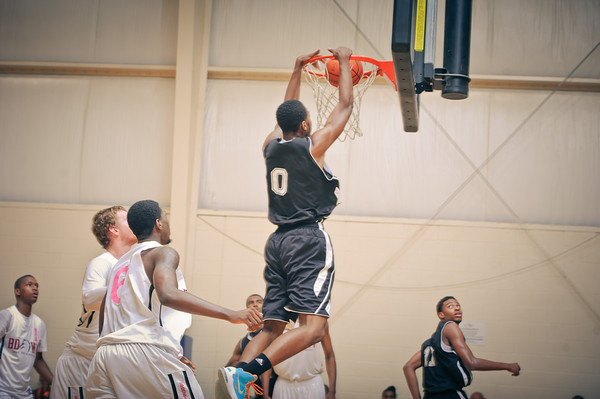 Editor’s Note: “In Focus” is a regular piece designed to give readers an in depth view of notable basketball players from around the country.

This week we shift our focus to the 2015 class and take a look at a future star within the Peach State.  One of the standout players at the Fall Showcase in September was 6-foot-7 forward Shawntrez Davis from East Point, Ga.   The athletic four player will play his high school basketball this season at Tri-Cities High School, but Davis already has the next level in mind.

Davis told OntheRadarHoops.com that his phone has been busy within the past few months.

“I have been talking to Mississippi State, Clemson, Auburn, Miami, Florida, Florida State, Maryland and many more,” Davis said.  “I have been happy with the recruitment process so far.  I have talked to a lot of coaches on the phone and getting a lot of questions answered.”

When Davis was asked about what will ultimately be the deciding factor on which college he will choose, he answered simply that he wants to find place where his abilities are needed.

“I want to go where I can bring my talents to the floor,” Davis said.  “Also finding a coaching staff and teammates that I can get along with are important.”

There is good reason why nearly every college program in the southeast has reached out to Davis.  As he showed in game play at the showcase, Davis combines terrific length with remarkable skill in the half court.  His instincts around the bucket plus his superb ability to run the floor make him an early candidate to be within the top 100 recruits nationally.  With these types of skills on the hardwood, Davis will not have to look hard for a team who could use his services to help them get to the NCAA National Tournament in March.

When projecting at how good Davis could become Shun Williams, the publisher of the OntheRadarHoops scouting report, says “Davis ultimate upside will be linked to how well he develops his face-up game.”  Williams goes on to say that “As of right now, however, Davis is one of the most impactful forwards in the state of Georgia in the class of 2015.”

Davis is not getting ahead of himself when it comes to basketball.  He seems to have his eyes focused upon the upcoming year.

“I am ready to be a role model and a leader for my high school team this season,” Davis said.  “It will be important for me to make plays and produce for my team.  I know that rebounding and running the floor will be critical for me.”

With this type of focus combined with the talent that Davis brings to the floor, fans around the state of Georgia could be talking about Shawntrez Davis for years to come.

Jonathan Hemingway is a National Evaluator for On the Radar Hoops scouting report.  He can be reached at JonathanHemingway@peachstatebasketball.com