Middle Georgia trio look to make a splash during the first evaluation period.

Ahead of the first NCAA Live Period, On the Radar Hoops takes a look at a couple of pre-tournament players that coaches and national media should make a top priority on their agendas at next weekend’s Sweet 16 Session I Tournament. 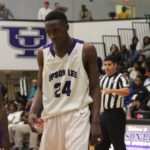 Tavias Fagan will lead a loaded Middle Georgia Supersonics squad into battle next weekend. Fresh off of offers from UGA, Georgia State, Mercer, and Middle Tennessee State, the 6-foot-3 lefty from Upson Lee (GA) High School is ready to continue in his quest for national notoriety. With a loaded field set for the tournament, Fagan will be one of the more intriguing prospects to watch for.

Cameron Holden is a talented all-around offensive player that can essentially score at will. Over the past two seasons, he has been a model of consistency for Mary Persons (GA) High School, but has yet to be rewarded with an official offer. Holden will suit up for the Team Georgia Magic this travel season, where he looks to play his way into the conversation on the recruiting trail. Low-mid majors will more than likely be buzzing heavy on the 6-foot-5 combo guard by summer’s end. In a bit of breaking news, joining him during the Sweet 16 Session I Tourney will be 3-star prospect Nelson Phillips. Phillips is another dynamic player from the state of Georgia quickly rising up the ranks. With a recent offer from Texas Tech, expect the 6-foot-5 wing to continue to turn heads as the travel season heats up.