Kane Williams was one of the biggest stock risers during the month of July. Photo Cred – Kemi Griffin

Atlanta, Ga. – The On the Radar Hoops Tournaments were held during the July evaluation periods. These were  must attend event for college programs around the country, which featured some of the top programs in the Southeast. Here are a few of the notable performers from the month of July.

This 6-foot-4 guard can play multiple positions along the perimeter, sliding between the lead and off guard. Williams has good court vision and sets up teammates for easy basket. He is tough and competitive, that toughness makes him a good rebounder for his position. Look for Williams to have a big senior season for South Paulding High School. 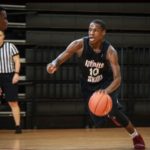 One of the most dominant guards our staff had an opportunity to see this summer. Miller was in constant attack mode during the Super 6 Showcase. He has a quick first step which helps him explode past defends and finish above the rim. Miller recently picked up an offer from Arkansas Little-Rock.

There is no question that Schwieger stretches the defense better than most. When he heats up he has the ability to go on a run to knock down several deep three pointers in a row. Not only is he a threat to shoot but he can also score off the dribble.

Bryant is a lead guard who excels at pushing the ball down the court, penetrating and hitting open teammates with on target passes. He is an accurate shooter from behind the arc or mid-range area. He has good acceleration, including an overdrive gear, which he utilizes to explode past defenders.

Heath caught the attention of several college programs after a strong showing at the Elite 32. He is a strong built guard that uses his body to over power defenders to get into the lane and find teammates for easy buckets. Heath also can make mid range shots off the catch or dribble with range to about 17 feet and can score big numbers in a short period of time when he is in the flow. 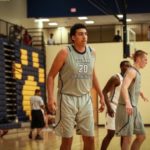 This 6-foot-11 post has good touch around the basket, where he can finish with either hand. Diggs even has the ability to step away from the basket and make shots from the high post or short corner. He is a good finisher and rebounder by virtue of his physical tools and has some evolving offensive tools with good footwork, a high release, and soft touch. 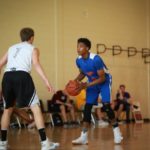 After a strong performance this summer, Doomes picked up offers from Auburn, Georgia & Georgia Tech. This 6-foot-3 guard was great attacking the defense in the half court, where he was able to finish with a combination of jumpers or floaters. 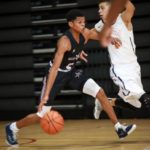 Segu probes and penetrates the defense looking for openings to attack where he can find open teammates with his court vision. Segu is athletic enough to finish at the rim or he will hit floaters and pull up jumpers. He can break and apply ball pressure as well and run the offense.

One of the emerging prospects in Georgia’s 2018 class. This athletic forward was a terror in transition where he finished above the rim and showed the capability to get to the basket with a couple or dribbles. 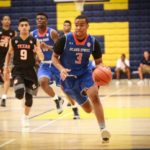 One of the most talked about guards during the first live period. Sturdivant is a smart lead guard that can score in a variety of ways.  He sees the court and puts immediate pressure on the defense by advancing the ball with the pass or the dribble. He can make plays in the quarter court by shaking his man to either side and utilizes his size and athleticism to finish at wide angles away from his body. 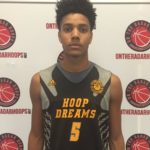 This 6-foot-4 guard has excellent court vision. Allen plays with a steady pace, getting a piece of the paint each time down the floor. He showed the ability to score and setup teammates for easy baskets.

King is an excellent athlete with good size and length, he can play either guard position. He excels on the break where he can get to the rim for acrobatic finishes or knock down the floater over defenders He is a big time slasher from the wing and along the baseline as well. King has a good basketball IQ and is a good enough athlete to defend both wing positions. 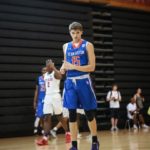 Baker is a scoring wing with good size. He runs the floor in transition and can knock down the open three. Inside the arc he has a combination of dribble moves to beat his defender finishing at the rim or pulling up knocking down the jumper.

Okoro has a prototypical wing-type frame with long arms and he is an explosive athlete. He is potent in transition where he knows how to finish at or above the rim. He plays with great energy and can make plays at both ends of the floor due to his length and quickness.