NORCROSS, Georgia, – The OTR Thanksgiving Tip-Off Classic provided many of the areas top teams an early season test. Dozens of college coaches and national media members were on hand to report on the action. Below is an overview of the action from Saturday’s games.

For a look back at all top scorers from Saturday, see our LIVE BLOG 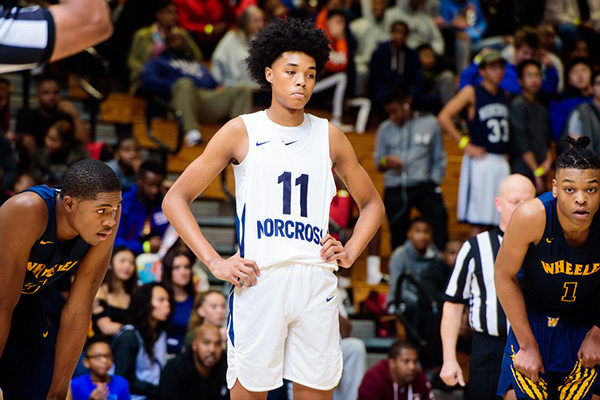 Wheeler jumped all over Norcross early in this game. The energy from the bench and their crowd seemed to set the tone for the players on the floor. The Wildcats looked to be very prepared calling out the Norcross sets and halting the Blue Devils from getting easy, early buckets.

Norcross did not go away without a fight, however. Senior point guard Kyle Sturdivant paced Jesse McMillan’s team into half time with a solid floor game. The game was a five-point contest with under a minute to go, but Wheeler was able to hang on and get a convincing early season victory.

Wheeler has had teams in the past with more overall talent, but this team seems to fit together as well as any as we have seen. They have high major talent in Charles Smith IV (California), but more importantly they have players that embrace their role. Jaire Eastmond (Denver signee) could be one of the best passers that we have evaluated recently in the state of Georgia. Add in the defense, rebounding and all around skill of Samuel Hines Jr. and Malachi Rhodes and coach Larry Thompson should feel very optimistic coming out of this game.

Norcross on the other hand has the talent to be a contender this year. Yet as it always is with every team with great individual talent, it takes time for each player to learn how to fit with the others. Point guard Kyle Sturdivant is an elite competitor. Class of 2020 5-star wing Brandon Boston is blossoming into a terrific all-around scorer. Class of 2020 guard Caleb Murphy provided great energy on both ends of the floor. And new addition in the middle class of 2019 Xavier signee Daniel Ramsey who will have multiple double-double games this year. Coach Jesse McMillan will use this setback as fuel to have his team ready for their competitive schedule.

Eastmond @Coach_ABC facilitated the offense & scored when needed while Hines made hustle plays from start to finish pic.twitter.com/ZYT2MrXt9h 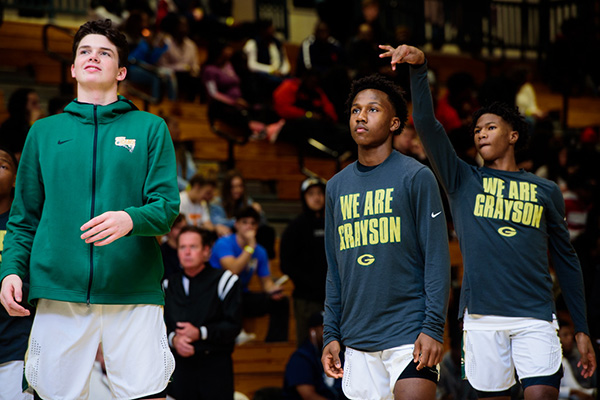 This game was billed as the top match-up of guard prospects of the day. However, for much of the game it was the defense that superseded the offense. This is to be expected in an early year match-up where the high energy defense can dictate more than the offensive execution. In the end it was the play-making of guard Deivon Smith that was the difference in the game. The junior guard’s play-making and passing ability is making him a quick stock-rising prospect nationally. Coaches from the University of Florida were courtside to take in the action and offered Smith afterwards.

Grayson is much more than just a one-man team. Their guard depth is worth noting. Available senior guard Reco Hallmon offers a full compliment of athleticism, scoring ability and play-making. Senior guard Javon Tatum showed flashes of great play-making as well. Coach Geoffrey Pierce as has youth along the frontline to develop in sophomores Ian Schieffelin and Taje Kelly. If this team meshes, they should be contenders in March.

Dacula’s trio of guards Brenden Tucker (College of Charleston), Mekhail Bethea (available) and junior Quincy Ademokoya have the potential to be as good as any back court in the state. Coach Byron Wilson will surely use this film to teach and motivate this group in future weeks.

He can put the ball in the basket in virtually every possible way. He can knock down shots from multiple levels & is unstoppable attacking the lane @graysonhoops pic.twitter.com/sP1f7WYW2w 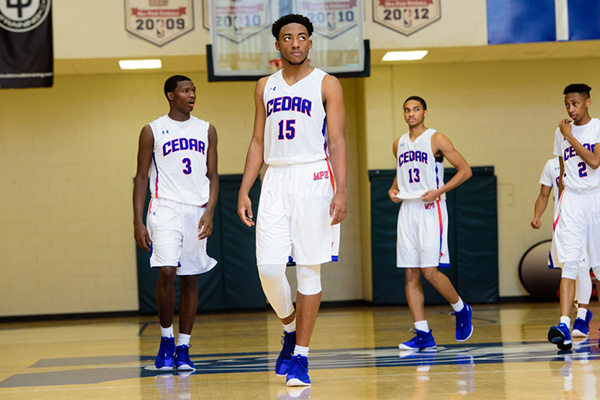 Coach George Washington’s team controlled this one from the tip. Pebblebrook’s guard play and superior size along the front line was too much for Cedar Shoals to handle for much of the game.

Cedar Shoals has reason to be optimistic regardless of what the scoreboard said at the end of the game. Class of 2020 forward Quincy Canty is a budding star for coach L’Dreco Thomas. His versatility and scoring ability is worth noting here. Once this team’s guard play can settle in and play at a high level, they should be a force to be respected in their region.

Jalen Harper had a coming out party of sorts during this game. Everyone in the stands remembered his older brother, Jared (Auburn), and his great play with Pebblebrook in years past. Jalen put his stamp on this moment as one of the top available guards in the state. He plays the game with pace and skill to match. Pebblebrook’s frontline players, class of 2021 forwards Jamall Clyce and Tyler Shirley, are names to pay attention to in upcoming evaluations. 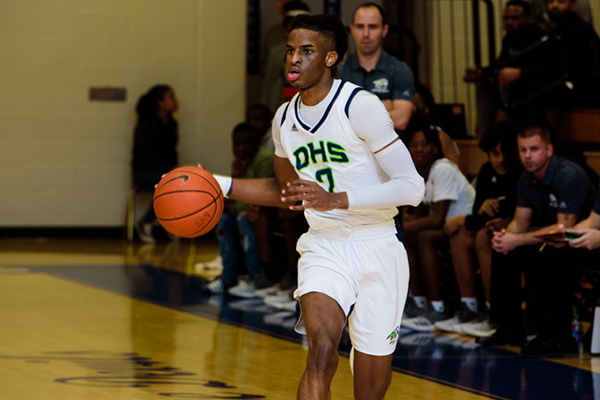 This was the closest, most competitive game of the day. Ultimately a Jaden Walker floater in overtime gave Discovery a win. This game gave us a glimpse at two teams who ought to make noise when playoff time comes around in February.

Coach Cory Cason’s Titans of Discovery have the talent and the pieces to be one of the state’s best. Available guard Hasahnn Reynolds is a big reason why. The 6-4 Miami native would win Gwinnett County newcomer of the year (if there were such an award). He is a great athlete with a skill set that should translate quickly to the next level. He hit four 3-pointers in the first half alone while also showing an ability to finish off the bounce in the lane. Reynolds coupled with junior Jaden Walker is a formidable scoring back court. Longwood signee Leslie Nkereuwem provides all the strength and dirty work production that this team needs in the paint. Available forward Ian Hardy, however, might be the ultimate key for the team’s success. His inside/out versatility was intriguing in this match-up.

For Southwest DeKalb, KD Johnson proved once again that there may not be a better player in transition than him. The junior guard is a top 100 caliber player nationally because of that skill alone. Yet on this night, the most impactful player for coach Eugene Brown’s team was James Glissom III. He scored 27 points and was virtually unguardable when he caught the ball in the high post. Junior guard Eugene Brown III was largely held in check, but he should have a big year because of his ability to score the ball.

Great showing tonight for @SWDPanthers F James Glisson III @JG3thetruth Glisson can get to his spots on the floor & make shots over defenders.

Soft touch on his jumper with strength inside as well, Glisson can cause problems. Finished with 27 points tonight. pic.twitter.com/PmklMcshNQ 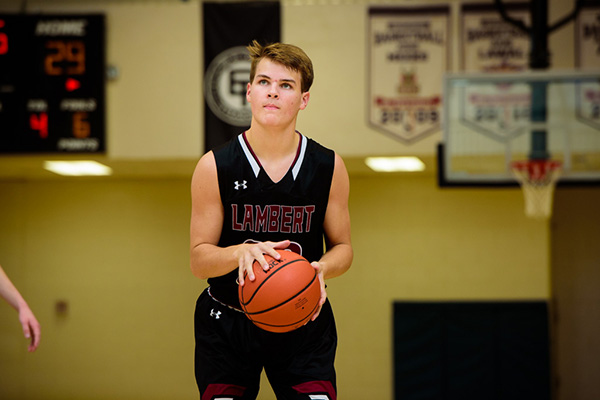 Early foul trouble to players on each team slowed the pace early. However, by the second half the depth of Lambert’s squad would be the difference. Scott Bracco’s team had three players in double digits and cruised to a solid double digit win.

Mitch Ganote might be one of the most underappreciated players in the state. A close eye on his floor game will tell you that Ganote controls the game like few can from the point position. His ability to move either direction and then find open players in either corner is unique at this level.  College coaches should take note of another metro-Atlanta area player who was told he was too small to play at the D-1 level: Bubba Parham (Brookwood) who scored 35 points versus Kentucky last night for VMI. While Ganote and Parham’s games are very different, their impacts might be the same at that level.

Woodward Academy has a special player in junior Walker Kessler. Already rated as a 5-star prospect by many of the national services, Kessler showed why on Saturday afternoon. His blend of hands, feet, shooting range and defensive presence make him a prospect of interest for many of the nation’s top programs. I compare his skill set and potential ceiling to Meyers Leonard who currently plays for the Portland Trail Blazers. It should be noted that Leonard did not have a steady 3-point shot until he arrived on campus at the University of Illinois.

Showed his full arsenal at the @OntheRadarHoops Showcase

This game came down to the contest’s final seconds. Sandy Creek had to hit critical free throws and get defensive stops to sneak away with this win. Eric Gaines of Lithonia looked to be too much for most of the game, but coach Jon-Michael Nickerson’s team clawed out an important early season win.

TJ Bickerstaff looks to be college ready after his season debut on Saturday. He scored 30 points and had some of the game’s most important buckets when it mattered most. He hit 3-point shots, distributed and defended at high levels. Class of 2021 forward Jabari Smith also showed a lot of tools in this one. He has not put it all together yet, but when he does he should be mentioned as one of the best in the state at his position.

Gaines is an explosive athlete. In the state of Georgia in the class of 2020, there are many great players at his position. Gaines made a case for his name to be mentioned right there with them. His 23 points and exclamation mark dunks had the gym buzzing.

Sandy Creek was able to walk away with the win after a 30 point showing from TJ Bickerstaff and 12pts from Jabari Smith. @HooperJabari @New_J23 @JMac_Nickerson @ParallelsMedia_ pic.twitter.com/BJUIGko71a 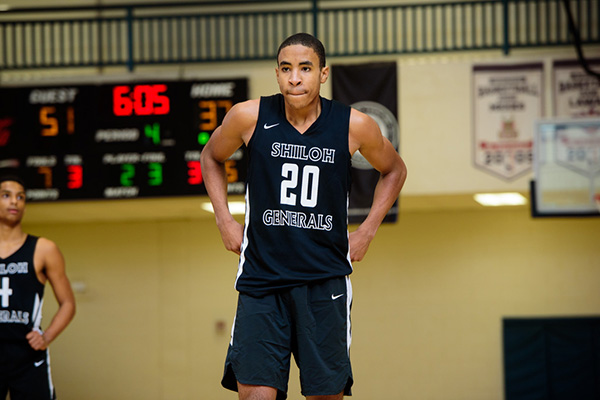 This game saw several ebbs and flows. Langston Hughes jumped out to an early double digit lead, but Shiloh fought back heading into the locker room at half time. Then the second half looked as if the Generals would cruise to an easy victory, but coach Rory Welsh’s team fought hard to make the game close heading into the game’s final moments.

Shiloh’s Toneari Lane showed a diverse skill set scoring inside and out. However, available forward Kendal Lewis looks to be one of the more intriguing 2019s in the area. His skill set is similar to Jaron Blossomgame’s (Clemson) when he played at Chattahoochee years ago. He has face up ability and defensive versatility.

Langston Hughes forward Tyrel Morgan showed his own brand of versatility that is powered by high energy and rebounding. He finished with 21 points in this one. Perhaps the break out name of the game was Patrick Carter Jr. who showed that he is a scorer from distance and in the lane.

’20 Patrick Carter Jr. @PJCarter17 (@LHughesHoops) had a good showing yesterday at the @OntheRadarHoops Showcase scoring inside and out 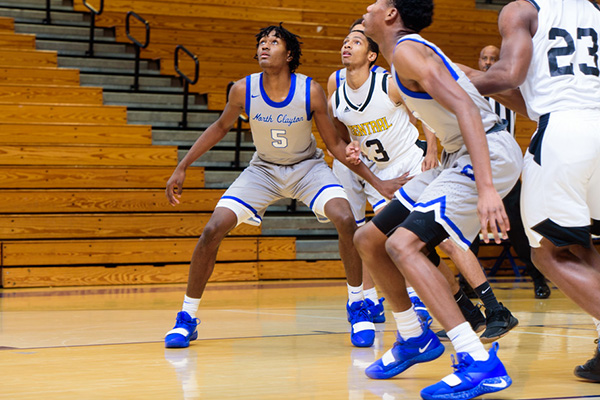 Early morning game, early in the season…you could tell there was some rust to shake off for both teams. There was plenty of energy, hustle and competitiveness. Both teams proved that they have plenty to work towards in the upcoming season.

Central Gwinnett has a sophomore who is worth being excited about. Sophomore guard Kazon Peters scored a team high 14 points and showed moves and shot making ability, which is something to build upon.

North Clayton has a wing in Xavier Valley who is busting with potential. Normally a kid his size (listed at 6-9) is relegated to the frontline or high post. However, he showed ball skill and play-making ability on the perimeter.