Upson-Lee High School is off to a perfect start this season with a record of 10-0. Junior guard Tye Fagan has played a huge role in the Knights success this year, as he is averaging 20 points per game to go along with 8 rebounds. Fagan is a long wiry guard who excels in transition by running the floor and finishing ahead of the pack. He is a good athlete that scores on slashes to the rim, offensive rebound put backs and showed that he was capable of connecting on jumpers with him and space. He is a good ball handler and an under rated passer mainly because he is such a good scorer. Defensively, Fagan plays with a ton of energy he is very effective using his length and quickness to both contain/disturb the ball-handler and help out on the glass.

Sophomore guard Zyrice Scott got into a groove in the second half, the 5’10 guard is quick off the dribble, He plays with a good pace and change of direction which allows him to get past his defender. He was effective penetrating the defensive and finding teammates for easy baskets. Scott will also connect on mid-range, pull-up jumpers, getting good elevation on his shot. 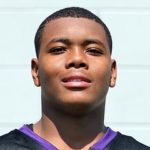 Travon Walker is a force on the football field and was unstoppable around the basket Tuesday night. He brings energy every time he takes the floor and impacts the game with hustle plays. He is an offensive rebounding specialist that has a good feel for the path off the ball and is relentless at chasing down second shot opportunities. He has a shot touch, displaying the ability to make shots from the high post or short corner. Walker has already been offered by Alabama and Georgia for football.