Atlanta, Ga., There were a number of teams from around the country that participated in the OnTheRadarHoops.com tournaments during the July evaluation periods. Here is a look back at a few of the notable performers over the summer.

Anderson excels in the open court where he can attack the rim utilizing his athletic ability and strong frame to finish at or above the rim. He has a very good first step to burst by defenders and his jump shot in the mid-range area was automatic. Anderson had multiple 20 point games at the Elite 32 Session II. Defensively, he affects the game in multiple ways. He is a terrific defender who slides his feet very well and he has very quick hands. 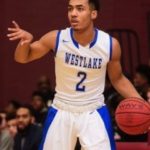 Lewis is a powerful point guard with a good basketball IQ. He handles the ball with ease and can penetrate and kick or finish through contact. He has a nice pull up in the lane when he draws a second defender. He constantly probes the defense seeking out an opening to make something happen. Lewis has deep range on his jumper that extends at least to the NBA line and he is not afraid to shoot it.

He has good size for the perimeter, explosive athleticism and has developed a versatile offensive arsenal. He is very smooth going to the rim, shoots it well from three and off the dribble. Gray has a very quick first step and can get to the rim with relative ease. Once in the paint, he ranks as a threat to finish above the rim at any time.

Players emerge this summer at the Elite 32 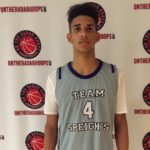 He is a good talent that is effective both catching and shooting as well as off the bounce slashing to the basket. He has range on his shot to 20 feet. He excels in transition where he can get to the basket or stop and knock down the jump shot. His physical style of play on the defensive end tends to wear down opponents and force them into bad shots and/or turnovers. 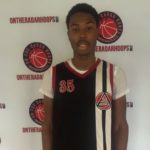 This 6-foot-7 forward made a name for himself this summer off his work ethic around the basket. Thornton has added muscle to his long and athletic body. He runs the floor extremely well can finish above the rim with a clear path. He does a good job of rebounding well inside and outside of his area. He post up well and provides the passer with an excellent target hand.

Lampley is a strong and physical small forward. He can score inside and out with his strength and athletic ability. He is good rebounder on both ends which is a huge asset to his game and a good passer especially from the high post area. He attacks the rim in transition or will show his mid range pull up mostly going right. He has a smooth release and follows through along with great elevation

He is a true point who makes plays for himself and others; he has a tight handle, good court vision, and pinpoint passing ability. He can drive to score or dish and shows great ability to read the defense and make decisions while in attack mode. He can score off floaters, pull-ups and wide angled lay-ups, he does a good job of penetrating the defense to find open teammates.

This shooting guard is a deceptive athlete that gets into the paint at will. He has a solid mid-range game, he understands when to drive to the rim and when to pull up for the jumper. Burse showed the ability to consistently knock down the deep ball in the Elite 32 Session II.

This 6-foot-5 forward can shoot and put the ball on the floor to get to the basket. He has a good stroke and knocks down open three’s and mid-range shots off the catch. He does a good job reading penetration and screens as he spaces to an open area. Defensively on the ball he is smart about how he guards as he uses his length to stay just close enough to contest the shot yet back enough not to get beat off the dribble.