Hoop Dreams guard Andrew Taylor was automatic from behind the arc at the Super 6 Showcase. Photo Cred – Kemi Griffin

DULUTH, Ga., There were a number of teams from around the country that participated in the OnTheRadarHoops.com tournaments during the July evaluation periods. Here is a look back at a few of the notable performers over the summer.

Bethea is a playmaking guard that get others involved. For him to just to be so young he is very poised. He controls the game speed and never gets rattled in tight game situations. Bethea has already received an offer from North Florida.

Relatively unknown before the summer, Reed was a star in the Elite 32 Session I. This 6-foot-8 forward has theability to play inside/out. He does a good job of rebounding in his area. He does a good job of running the floor in transition where he finishes above the rim. Since July Reed has picked up offers James Madison, Rutgers, FIU, Stetson, NJIT, Florida Gulf Coast,  Clemson and more. 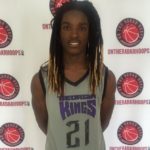 Melvin is MR.DO IT All for the Georgia Kings, He is a physical wing that plays hard on both ends. He scores when have to and can guard multiple positions.  He has nice a jump shot but what I like most is when he put his head down and attack the basket. Melvin has picked up offers from Southern University and FCGU.

One of the top shooters that our staff had an opportunity to see this summer. Taylor does a good job of directing traffic, putting teammates in position to score. He is also a threat off the ball where he does a good job of knocking down shots coming off screens and finding holes in the defense to make the open shot. 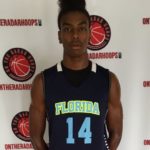 Standing at 6-foot-7 Allen plays with incredible motor. He is a lefty that can knock shots behind the arc or put the ball on the floor from the high post or short corner. With his size and stature, he can block shots and grab rebounds. Robert currently holds an offer Stetson but look for his recruitment to take off during his junior campaign.

This 5-foot-10 point guard kept defenders off balance with his sharp ball handling skills. Halloran can create space to get off a shot or blow by his defender to find open teammates. He is pass first guard but can score when he has to by getting into lane and using his floater over taller defenders. 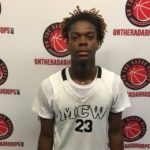 Burnett saw his recruitment take off at the Power 24 as he drew crowds of coaches each game. He was automatic from behind the arc as he has the ability to stretch the defense knocking down long jumpers. Burnett currently has offers from Troy, UT-Chattanooga, UNC Greensboro, and Murray State. 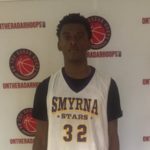 Wade caught a lot of the coaches’ attention during the final live period. He is a versatile wing that can score and plays above the rim.  He is very active on both ends of the floor. But what I like is how is able to stop on the dime pull up for the mid range jump shot. He showed that he can knock down that shot down consistently. Wade will be attending the Skillset Prep for the incoming school year. 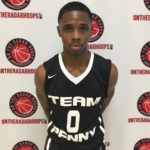 Standing at 5-foot-10 Freeman is a very competitive point guard that plays every possession like it’s his last. He has very good knowledge of the game and knows how to control different game situations. Freeman has a very quick handle and stays very low to ground making it hard for defenders to guard him. He showed us that he can be dangerous behind three-point line by averaging up to (4) three pointers per game. Freeman has received offers from Murray State and Alabama but more offers will sure to roll in with just being a rising junior.

At 6-foot-10 225 pounds Simon can put fear in his opponents out on the floor.  With his size makes him a good rebounder and a great rim protector. He plays with high energy and has very good athleticism. As Simon offensive game continues to grow he was able to knock down hook shots over his defenders with either hand. Simon currently has multiple high major offers a few are: Clemson, Florida, and Maryland.

Jacori Wilson is one of the most versatile forwards in Georgia’s 2017 class. Wilson had his offensive game on display at the Elite 32. Showing that he could make shots from behind the arc, mid-range and put the ball on the floor.

Rising sophomore guard Cam Rowland of Georgia Red Storm, showed the ability to move without the ball finding holes in the defense where he knocked down open jumpers. He exceled in transition where he was able to finish around the basket.

Florida native Corderius Hastings was a scoring machine in the Super 6 Showcase. He showed the ability to score at all three levels as well as get others involved.

Infinite Skills forward Noah Gurley was impressive at the Power 24. At 6-foot-7, Gurley showed the capability to play in the high post as well as on the perimeter. He has a nice looking stroke from behind the arc where he can knock down the open jumper with time.

Terrell McDonald of Muscle Shoals, Alabama, constantly attacked the lane where he was able to finish through contact. McDonald has the ability to guard multiple positions along the perimeter.

Donte Medlock is a contributor to OnTheRadarHoops.com