Southwest DeKalb high school in Decatur, Georgia played host to its fourth annual Southwest DeKalb Showdown to open the much anticipated Georgia high school basketball season. Georgia squads from McDonough, Fairburn, Clarkston and even one team from Tallahassee, Florida made their way to east Atlanta for a competitive day of games throughout. In the seven games played, these are the top performers who stood out on the afternoon: 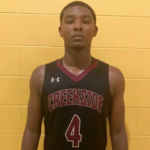 Jackson was a man amongst boys in the match up against Towers high school Saturday afternoon. Although both teams played zone for the majority of the game, Jackson stayed patient and made a consistent impact in the game on both ends of the floor. His jump hook over the left shoulder was reliable, the baseline mid-range game was in effect, and his ability to find the open man when double-teamed may have been the most impressive attribute of all. Jackson stayed active on the glass, blocked shots, and still had enough energy to run the floor consistently for 32 minutes. With the game tied late, he was able to get to the free throw line for the go-ahead free throw, putting his Seminole team in a position to overcome in a close 59-58 battle. His stat lines were along the lines of 20 points, 12 rebounds, and 7 blocked shots and he will be one to keep an eye on watch as the season continues for this Creekside team.

Daniels was the smoothest guard I had the pleasure of watching at SWD Showdown. Even in a 79-78 losing effort in overtime, he was able to handle pressure in an up and down and fast paced game; slicing and spinning through man to man pressure and using an air tight handle to score and assist at the rim. Daniels has a stringy frame and those long arms are an advantage when finishing at or above the rim. His outside shooting was another weapon in his arsenal as he was never afraid to pull the trigger, even from 25 feet if left open. This Lithonia team is full of talented guards but it was Daniels who led the attack for Lithonia on this day. 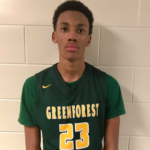 Jackson, who is my choice for top overall performer at the Showdown, would not let his team be outdone against Lithonia. Down 9 at the half and as many as 15 in the 3rd quarter, the Eagles locked down defensively and stretched the game out to overtime where they would eventually overcome in a 79-78 instant classic. There were big shots made from teammates but it was Jackson who seemed to be in the mix in almost every play offensively for Greenforest. Pulling up for clutch 3s in transition late, making steals, and converting on and one opportunities with tough drives to the basket was the story for the Decatur prospect. At 6’5” he can get to the rim, finish off the bounce with nice touch in traffic with comfort and poise. His scoring ability on all 3 levels were in effect for Jackson and his clutch free throw line shooting late proved to be the difference in a 32 point output for this gamer. 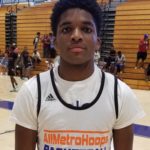 In the main event matchup against North Florida Educational Institute, it was KD Johnson that got the home crowd into it early with back to back steals and scores, which included a thunderous dunk that aided a 24-11 first quarter lead for the Panthers. North Florida Educational Institute battled back with tough defense for the following three quarters and overtime to claim the 73-71 victory but Johnson remained steady in his attack. The sophomore has a great handle and with the shot blockers on North Florida’s roster, his above the rim drives were necessary after he’d beaten his initial defender off the dribble. Johnson, who finished with 27 points, showed why he was placed many preseason all state first team lists and it will be interesting to see how he leads a scrappy Southwest DeKalb team in the tough region that is 5-AAAAA. 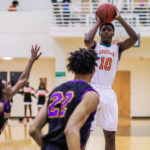 Ivery has already proven himself throughout his prep and travel ball career, but the Georgia State signee showed again why he’s a difficult player to defend at Southwest DeKalb Showdown this past weekend. At a legitimate 6’6” Ivery’s smooth stroke and high release looks great coming off his hands consistently and makes it hard for contenders to contest. He has a good handle on the basketball and has a college ready frame to take contact and finish on driving opportunities. With him being the focal point on this Stockbridge team, he had to get going in the first half to keep his team in the game, and even though he team end up losing 64-56, Ivery continued to show his flashes inside and out. He will continue to continue to be the main option for the Tigers this season and will be an asset to a talented 2018 recruiting class for the Panthers of Georgia State next season.