Many of the top middle school players in the south competed in the Junior Elite 100 Camp. Photo – Ty Freeman

Norcross, Ga., – Finding a way to play top talent while also getting quality exposure is a tough proposition for younger players. However, the Junior Elite 100 Camp provided that exact formula. Here is a look at some of the stars of tomorrow who got the foot in the door in front of OTRHoopsReport.com evaluators.

Hubbard is a good shooter that can get on some amazing scoring runs with his ability to knock down shots from deep or the mid-range area. He is a true defense stretcher because he demands the full attention of the defense. Hubbard was also effective scoring slashing to the basket with limited dribbles. 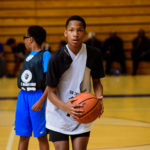 He is an active and aggressive forward that is always around the ball. He runs the floor with great speed and is at threat to finish in transition. Turner is athletic and plays with passion on both ends. He excels on the glass as he sprints to the lane from the perimeter for tip in and his share of rebounds in and out of his area.

Reece is a good shooter off the catch or dribble with three-point range. He has a sweet stroke with a quick trigger. Reece has a good mid-range pull up but also showed the ability to get to the rim slashing to the basket. 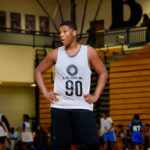 Lockett a big bodied low post player. He has good hands and feet and is very effective on the low block. He does not get a great deal of lift but uses his big body to carve out space inside. Offensively he scores mostly on put backs, tip-in’s and guard penetration.

At 6-foot-4, this high energy wing took the ball to the basket strong and aggressively which is the strength of his game. He sets up his drives with ball fakes and is terrific and the rip through and catch and go move where he does a great job of taking advantage of is quick first step.

Swain is a slashing scorer and good defender who made the most of his time on the floor. He scores by filling lanes in transition, slashing to the rim, or pulling up in the mid-range area. Defensively, he is very effective using his strength and quickness to both contain and disturb the ball-handler.

One of the top shooters in camp, Gober has the ability to knock down several deep three pointer stretching the defense better than most. He does a good job of moving without the ball, finding holes in the defense and connecting on shots.