College Coaches packed the baseline this summer at the On the Radar Hoops Elite 32.

Atlanta, Ga – The On the Radar Hoops July Tournament Schedule provided the perfect stage for players to pick up new offers and get the exposure that they were looking for in the July viewing period. With teams from around the Southeast as well as from as far away as Wisconsin, players were able to display their talents to coaches from around the nation 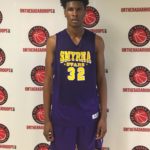 Coming into the July Live Period, Carlos Curry was unknown to most of us, but that quickly changed. The 6-foot-11 , South Georgia native made a lot of noise at the Super 6 Showcase. Curry is very mobile at his position, with has large hands he can control the glass and protect the rim. There were multiple games in which he had 5 or more blocks. Even in one game during the Elite 32 he had eleven blocked shots. Curry is still raw offensively, but he did show that he could run the floor, and face up to hit the fifteen footer. College programs looking for an under the radar post player need to get their eyes on Curry. 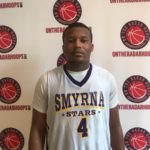 Coming off a state championship with Greenforest the unsigned senior played with a chip on his shoulder the entire July Live Period. Mike is a lead point guard you would like to have. He plays at his own pace does not rush the offense, gets his teammates involved and knows how to pick his spots to score the ball. With his consistent good play for the month of July, he earned an offer from Morehouse. 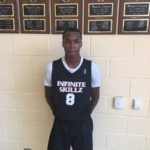 Jamir is one the better shooters we had a chance to see in the month of July. During the Power 24, Williams made over (15) three pointers in four games. Williams shoots the ball very efficiently, especially if left alone. Even though he shoots the ball at an efficient rate, I would not label him just a shooter. Standing at 6-foot4, he has a lot of length and is capable of defending multiple positons.

There aren’t too many players that play hard from start to finish. Allen has a relentless motor, he does a good job of rebounding inside and outside of his area. In the half court, Allen showed that he can put the ball on the floor going left, connect on mid-range jumpers, and finish around the basket. Allen caught the attention of several programs this summer. 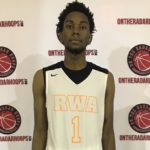 Acree may not be flashy, but the kid consistently produces. He understands how to score around the basket, in transition, and is effective attacking the basket. He is a good positional defender in the paint and does a good job of contest shots around the basket. 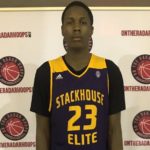 Kelly is a skilled big forward that can score inside and out which allows him to create match-up problems. He has a nice back to the basket scoring package and can also knock down the mid-range jumper. Size and skill highlights this talented players game, Kelly will continue to see his recruitment grow this fall.

James is quite potent in transition where he knows how to finish at the rim and through traffic. He plays with great energy and can make plays at both ends of the floor due to his length and quickness. He is a powerful drive and slasher from the wing and along the baseline in the half court. James picked up an offer from Kennesaw State after the Super 6 Showcase and recently earned an offer from Lincoln Memorial.

During the final evaluation period, James put up double-digit scoring numbers in an effort to help his team win a championship. James is a scoring guard with a good feel for the game. He has the ability to run the team and get others involved. He also showed that he could penetrate the defensive to score or connect on shots from behind the arc if left open.

Shaheed did not play much this summer because of an injury. Therefore, I was interested in seeing him at the Power 24. Known to be a crafty guard, he showed that he did not lose his ball handling ability or his flare. He is very shifty and knows how to use his change of speed to get past defenders. Once in the lane, Shaheed has a variety of finishes at the rim which allowed him to finish over bigger defenders.

Donte Medlock is a contributor to On the Radar Hoops